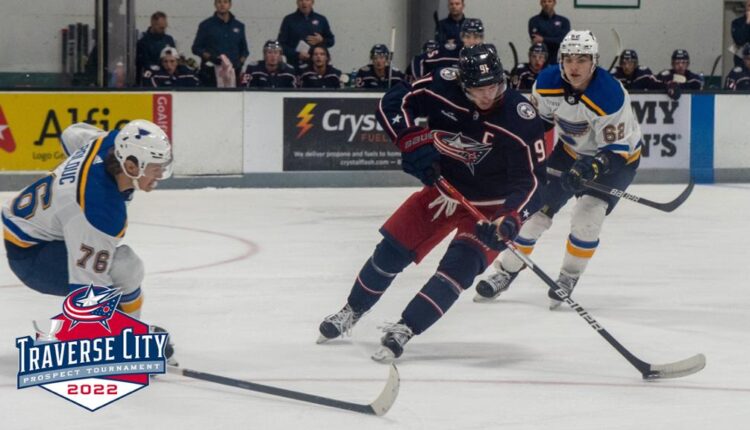 Traverse City pocket book: Johnson gets a look at center

As Jarmo Kekalainen likes to say, in the NHL, players make most of the decisions about playing time and roles with how they perform.

So while the Blue Jackets general manager chose KentJohnson fifth overall in the 2021 draft as a center — and maintains the talented forward still very well could be a pivot instead of a wing — how he handles the transition to the NHL level will end up answering the question.

Johnson played on the wing the last two years on a University of Michigan team that had two first-round draft picks and a second-rounder down the middle, and he did the same in his nine-game NHL cameo at the end of the last season that featured a 0-3-3 line.

At this past week’s NHL Prospect Tournament in Traverse City, Mich., Johnson was back in the middle, though. That was partly because the CBJ roster was wing-heavy, but it also helped the Blue Jackets get a look at how Johnson would fare playing the center position against some good competition before training camp.

“It’s good,” Johnson said after the middle game of the three at the event. “It’s fun to get back in there, battle in the dot, and playing in the D-zone. I felt a lot better in those areas today. It was good.”

Johnson was a center growing up and in junior hockey with Trail of the BCHL but was a team player at UM with the switch to the wing. He was still one of the top producers in college hockey with the Wolverines, posting 64 points in 58 games in two seasons, and that offensive ability was very much on display as he led the team with a 2-5-7 line in the three games in traverse.

The adjustments, as Johnson said, come mostly on the defensive side of the puck — where centers bear more responsibility — and in the faceoff dot.

Video: Johnson cleans up the mess

“He looks good,” said Trent Vogelhuber, the Cleveland Monsters head coach who skippered the CBJ players in Traverse City. “He’s assertive, he’s hard on pucks with the stick. I think he can improve in the faceoff circle. It’s something (where) every new centerman takes a little time, but there’s no worry from my perspective. He’s certainly smart enough to play the position, and as he continues to get stronger, he’s going to get better and better. That will help with faceoffs as well.”

No official statistics on draws were kept, but Johnson admitted that might be the place he’ll need to improve the most given he’ll be going up against seasoned veterans at the dot as he moves up the ranks.

“The tactics in the faceoffs are different than when I was younger, just kind of slapping at the puck,” Johnson said. “I have to dial in on stuff of those new tricks, but in the D-zone, obviously it’s a little bit more work sometimes. But it’s good to get back doing that.”

The 19-year-old said he felt more comfortable as time went on in Traverse City, but time will tell where he’ll end up playing both down the road and this season. Head coach Brad Larsen has said he wants to be fair to Johnson in his first NHL training camp, so he might see the bulk of action at the wing to start, but the Blue Jackets remain quite high on Johnson’s abilities.

“I think your most creative, offensively talented players, if you can have them playing center, it’s such a bonus for the roster,” Vogelhuber said. “It’s a good opportunity for him here to play that position and get comfortable with it, and we’ll see what happens at training camp. That’s a little bit above my pay grade. We’ll see there, but I think he’s proving that he’s certainly capable.”

The CBJ roster for Traverse City had no shortage of connections coming in.

There was a quartet of Czech players, most of whom have known each other since they were kids. One of those players, Martin Rysavy, also had a familiar face in town Denton Mateychuk, his teammate a season ago with Moose Jaw of the WHL. Then there’s Luca Del Bel Belluz and Ole Bjorgvik-Holm, the wonderfully named duo who played two seasons together with Mississauga of the OHL.

But two players who spent as much time hanging out with one another as anyone were Johnson and goaltender Jet Greaves. Whether they were playing chess at the team hotel, challenging each other to rock, paper, scissors games or going for a swim in Grand Traverse Bay, the two clearly have made a quick bond since becoming Blue Jackets, thanks in part to a mutual friendship with fellow CBJ prospect Jake Christiansen.

“We’ve become really close friends over this time,” Greaves said. “We both go about the game a similar way in our preparation. We like to study the game and learn different things. We always love picking each other’s brain and arguing about different sides of the game or what you should do on different plays.

“We’re talking hockey a lot of the time, but we’re always trying to challenge each other and push each other. It’s really good when you can have guys around you like that.”

The plan for goalie Pavel Cajan was to spend another year with Kitchener of the OHL, but that’s before the Blue Jackets came calling.

Columbus invited Cajan to join his summer development camp in July, then was so impressed with the Czech netminder that Cleveland signed the 19-year-old to a two-year contract starting this season.

“This sounds better,” Cajan joked after starting the team’s loss to Detroit in Traverse City. “I didn’t expect that I would turn a year, but it happened and I am glad it did.”

Cajan grew up in the Bílí Tygři Liberec system in his native Czech Republic but came to North America to play in 2020-21 only to see the entire OHL season wiped out by COVID. This past year, he was the No. 1 goalie for the Rangers, going 21-18-14 with a 3.61 GAA and .901 save percentage.

He boasts good size at 6-2, 176 pounds, and looked solid in Traverse, stopping all eight shots in the team’s comeback win Sunday over Toronto. He said it’s still a bit hard to comprehend each night that he’s signed a pro contract and is camping with an NHL team, but he said he was excited to get the opportunity to wear the union blue in Traverse City.

“It was great to make a start with the Blue Jackets,” he said. “I enjoyed it. I think I played well. I think there is so much stuff to improve, but it’s the start of the season and everything.”

We can debate issues, but public education shouldn’t be a political war zone ⋆