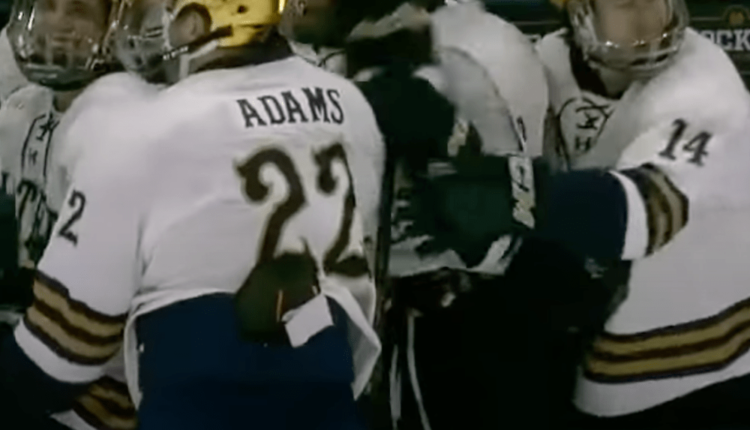 Red Wings of Tomorrow is assessing every prospect in the Detroit Red Wings system and what they are projecting to be in the future. We’ll be looking at the strengths and weaknesses of their game, as well as what the future holds for them as they advance through the Detroit organization. Today, we feature center Jack Adams

How Acquired: Selected 162nd overall in the 2017 NHL Draft

Adams is a holdover from the Ken Holland era in Detroit, selected five years ago. Since then Adams has had a diverse experience in hockey, playing for Union College (2017-2019), Providence College (2020-2021), and finally Notre Dame last season.

We light the lamp again!!🚨🚨

Jack Adams punches it in and picks up the first goal of his Notre Dame career!

The returns last season were positive with six goals and 16 points. His performance last season harkened back to the USHL season he had with 37 goals with the Fargo Force in his draft year.

Working on his graduate degree at Notre Dame, Adams’ path to Notre Dame was affected by tragedy when his brother Mark passed away suddenly in 2018. Then at Union College, Adams played at Providence during the 2020-21 season, donning his brother’s number in the lone season. His season at Notre Dame, then, is one of triumph as he has been challenged by more than just the ups and down of a hockey journey.

As for his time in Detroit, Adams’ rights still belong to Detroit through August 15, 2023. The 6’6 forward will return to Notre Dame for the 2022-23 season, and the Red Wings will be keeping an eye on his performance.

Notre Dame head coach Jeff Jackson said in the school’s official announcement of Adams’ return that he made “big strides in rediscovering his game.”

His successes, whether or not they result in an entry-level contract, go far past playing the game. From a perspective of where he is in Detroit’s system, he’s somewhere in the middle.

But if he builds on the success of last season, what a story it will become for the Red Wings prospect. It’s one that will go beyond just success on the ice.

For Lansing Common FC, a painful loss, but ‘surreal’ finish to year of growth