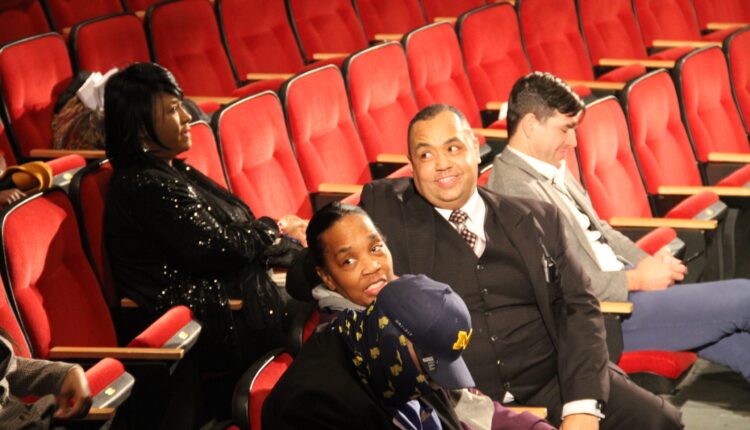 Forty-two votes were tallied for candidates seeking to serve on a neighborhood advisory council tasked with representing Detroiters in negotiations with two development firms planning $1.5 billion in construction to reshape an area straddling downtown and Midtown. Terrance Reid and Henry Williams, residents of the Brush Park neighborhood north of downtown, were elected to serve on the advisory council after making their case to residents.

Seven other members will be selected in the next month by the city’s Planning Department and At-large City Council members Mary Waters and Coleman Young and District 6 Council Member Gabriela Santiago-Romero. The group will convene after the New Year to begin a two-month process of identifying and addressing community concerns – a legal mandate for developers seeking tax breaks for massive construction projects in the city.

A look at the designated impact area for developments planned north of downtown Detroit. (Image provided by City of Detroit)

The Ilitch family’s Olympia Development and Stephen Ross’ New York-based Related Companies must engage with the community if they want public help to finance their vision for hotels, office buildings and apartment units near Detroit’s largest entertainment venues. Residents in a designated impact zone have a lot of questions, particularly since past promises to develop the area pitched as “District Detroit” haven’t been followed through on.

Reid and Williams said they’re hoping to provide the perspective of residents in meetings with the developers. The end goal is a community benefits agreement signed by both sides and enforced by the city’s Civil Rights Inclusion and Opportunity Department. Past agreements for other projects have included commitments to hire Detroiters, set rental rates that are affordable for low-income residents, dedicated space for local organizations and improved area parks and amenities.

Reid said he’s a homeowner who moved to Detroit three years ago after living in multiple cities across the country and the globe over the last two decades. He wants to see improvements in the area focus on building an inclusive, safe and walkable community.

“One of the things I think I bring to this project is experience living and working and traveling to a great deal of other places,” Reid said during Tuesday’s meeting. “I have experience with highly-dense, highly-diverse, high functioning communities, which is exactly what we see evolving and we want to be a part of here.”

Williams is a lifelong Detroiter who grew up in the once vibrant, now demolished Black Bottom neighborhood. He now rents in a senior housing development finished by Bedrock Detroit in 2019. Williams said he earns too much to qualify for reduced rents offered to residents below the area median income, but there’s a huge need in the area for more affordable housing.

Williams, who said he’s been politically active since the 1970s, told BridgeDetroit he’s cautiously optimistic that the development will contribute to the revitalization of Detroit.

“I’ve seen this city as a child when you could walk the streets, everybody knew your name and your parents,” Williams said. “I’ve seen the city when it burned down and now I’m seeing it come back. I’m all for it. I just keep my ear to the ground and try to stay up on what’s happening.”

Williams, who drives a shuttle bus to downtown entertainment venues like the Fox Theatre and Little Caesars Arena, said he’s concerned for seniors who struggle to find parking near their homes during events. His neighbors have been forced to carry groceries several blocks, Williams said.

“We’re inundated with people from out of town or from the suburbs, who don’t live around here,” Williams said. “They just come and take the parking spots, and we’re left to fend for ourselves.”

Still, Williams said attention and investment in the area is a good thing. Detroit residents who attended the two District Detroit community benefits meetings have remarked on all that has  changed for the area in recent years. Williams said there was “no life” in the no-man’s land between downtown and Midtown a decade ago. He remembers the area being seedier even further back.

“Drugs, prostitution, vice, all kinds of activities was going on down here. Now you see people walking their dogs, taking a leisurely stroll through the neighborhood,” Williams said. “Twenty years ago, excuse my expression, you wouldn’t see a white face down here in this area.”

Census data shows Woodward Avenue and Interstate 94 create distinct boundaries in District Detroit. Residents who live on the northwest side of the area are more likely to have lower income than their neighbors on the other side of Woodward. The area south of I-94 has a higher concentration of white residents and people who recently moved to Detroit and who are likely to earn more and pay more for rent.

Boston Edison resident Mark Hall said Olympia Development is to blame for the uneven prosperity. The firm owns dozens of parcels of land that aren’t part of the latest development plans, and Hall argues that Olympia has been allowed to sit on them idly for too long.

“It just seems like there’s a big thing they’re glossing over,” said Hall, a former Brush Park resident who attended Tuesday’s meeting. “Almost all the abandoned buildings in this whole neighborhood are owned by them. That’s such a huge detriment. I feel like blight is constantly talked about – it’s bad and hurts communities – but I feel like they just get away with it. You can just own 40 buildings and there’s no plans for them.”

Trust between residents and the developers is in limited supply. Andrew Cantor, executive vice president of development for Related Cos., said the partners are being “thoughtful” about ensuring development is inclusive and that Detroiters should believe that they’ll follow through this time. But major questions still remain, including how much the developers will seek in tax breaks, whether there’s demand for more office space, and how those changes would affect affordability for existing residents.

At least two Detroiters walked out of the last two meetings after voicing frustration with the developers. On Tuesday, as he left the meeting, a man yelled toward the stage that “y’all are patting yourself on the back” instead of listening to low-income residents.

There are still seven seats on the neighborhood advisory council which have to be filled. The list of nominees comes from the remaining candidates who stepped forward at Tuesday’s meeting and will be picked before the next community benefits meeting on Jan. 6. Candidates include:

authored by
First published at https%3A%2F%2Fwww.bridgedetroit.com%2Fneighborhood-advisory-group-district-detroit%2F