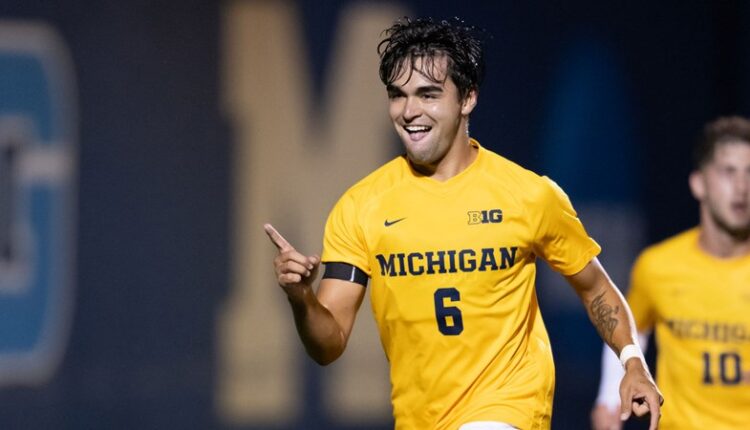 » Quin Rogers scored the game winner on a penalty kick.
» Rogers also assisted on the first goal of the evening.
» Bryce Blevins tied the game in the second half of play.
» Michigan outshot Detroit Mercy, 18-8.

ANN ARBOR, Mich. — Jr QuinRogers secured a 2-1 victory for the University of Michigan men’s soccer team (2-3-1) over Detroit Mercy (1-4-1) as he scored on a penalty kick in the 75th minute of the match at UM Soccer Stadium Monday evening (Sept. 12) in a non-conference contest.

The Wolverines rallied back from a Titan goal in the 68th minute of the match as freshman Nicholas Kaloukian gathered the ball just inside the 18-yard box and flicked it back to Rogers, who got the ball ahead to junior Bryce Blevins. Blevins fired the shot into the upper-left corner of the net to knot the score at 1-1. Just one minute and 50 seconds later, UM earned a penalty kick opportunity, which Rogers buried for what would be the game-winning goal.

Michigan outshot UDM, 18-8, with seven shots on goal, while the Titans had five shots on goal. Sophomore goalkeeper Hayden Evans notched the win with four saves on the evening.

Evan Rasmussen fired off two shots, including one on goal in the first 10 minutes of the match. Evans made a crucial save in the 22nd minute as he dove to his right to keep the match scoreless. With time winding down in the first half, Nolan Miller headed a shot on goal, but the keeper grabbed it and the two teams went into the halftime break scoreless.

The Michigan offense came out firing in the second half with back-to-back shots from Kaloukian and Uriel Zeitz but it was UDM that found the back of the net first with a shot into the upper-right corner of the net.

The Wolverines wasted no time responding as they tied the game six minutes later in the 74th minute on a Blevins goal and netted the game-winner on a Rogers penalty kick in the 75th minute.

UM tried to tack on one more security goal with two final shots, while keeping Detroit Mercy without a shot in the closing 15 minutes of the match to lock up the victory.

Michigan will open Big Ten Conference play on Friday (Sept. 16) when it hosts Maryland at UM Soccer Stadium for a 6:30 pm contest on the Big Ten Network.

Sights and Sounds: Enjoying Nature on the Boardman River in Traverse City