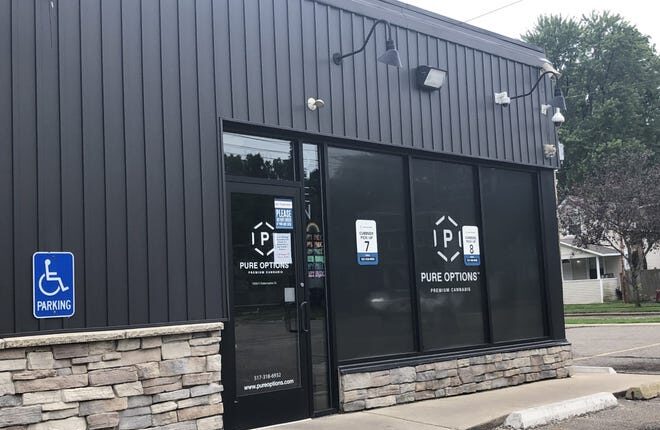 LANSING — Pure Options, a locally based marijuana company, has closed one of its Lansing stores and laid off six employees who worked there as part of a “growth plan initiative” that will include opening two new stores in the city this fall, company Human Resource Director Jennifer Mack said.

The company operates three other stores in Lansing, along with one in Muskegon and another in Mount Pleasant. Pure Options was one of the first cannabis companies in Lansing awarded a state retail license two years ago.

The company plans to open stores at 5031 S. Cedar St. and 500 E. Oakland Ave. at Lansing in October or November, Mack said.

The East Kalamazoo Street store was too small, Mack said, and “did not meet the new facility quality standards the company has set,” according to a news release emailed to the State Journal Wednesday.

Mack said she didn’t have a total for the number of employees who worked at the store, which was both a medical and recreational dispensary.

“We relocated as many employees as we could and offered them positions at different locations,” she said on Wednesday afternoon. “There ended up being six that we had to lay off and they were encouraged to keep watching our website, keep in touch with us and apply for other positions as they become available in the area.”

The layoffs came as a surprise to employees at Pure Options Lansing East, said Riley Fisher, who worked there. Management notified them about the layoffs about a week before the store closed.

Fisher, who had been employed there since April, said employees were offered a retention bonus of $100 if they agreed to continue working through Aug. 27.

“They just gutted the whole store,” Fisher said. “I’ve worked a lot of different jobs and this is the first place I could come to and feel welcomed and celebrate who I am. It was a fun place to work.”

Looking for the perfect sports bar to watch Michigan State football? Start with these six

Megan Oldenburg, 23, who worked at Pure Options Frandor, said she was one of five employees who were laid off at that location the last week of August. She started working at the store, located off North Clippert Street, in March and was notified that her position was being eliminated on Aug. 30.

“It just came out of nowhere for them to fire people,” Oldenburg said.

Mack declined to confirm or comment on any layoffs at Pure Options’ other stores, citing “employee confidentiality.”

The company does plan to hire additional employees for positions at the stores it expects to open this case, she said, though it’s unclear how many.