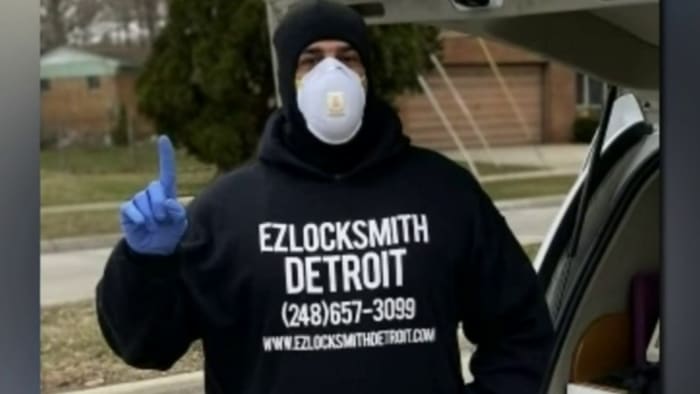 DETROIT – A locksmith is out of surgery and recovering after he was carjacked and shot while on the job on Detroit’s west side.

It happened Wednesday night at a home on Sorrento Avenue, not far from Schoolcraft Street and Meyers Road and Detroit police’s 2nd Precinct intersection.

With a second baby on the way, Eli Zohar was ambushed and shot in Detroit while working as a locksmith.

“He’s in so much pain it’s not just he broke his leg,” said wife Marisa Monkman. “The bullet completely shattered it.”

Zohar owns his own locksmith company, so when he got a call Wednesday (Aug. 3) evening about a person being locked out of their car on Detroit’s west side he went to do his job.

But it was a setup.

“There was a man waiting with a ski mask and two guns and demanded his money, phones and specifically said the machines in your car,” Monkman said.

Monkman texted her husband about their growing family just hours before he was shot.

The pregnancy is high-risk, and they’ve lost a baby before.

“I was so excited that our family was growing and she was going to have a sibling, and when he was in the ER, he looked at me and said, ‘thank God for the baby,'” Monkman said. “I think in that moment, he was so grateful he was alive.”

Their baby girl is due in October.

Zohar will require months of rehabilitation, and the bills are piling up.

“They destroyed our life right now, they broken his spirit, they hurt my family, they didn’t just take something from him, they’ve hurt my entire family,” Monkman said.