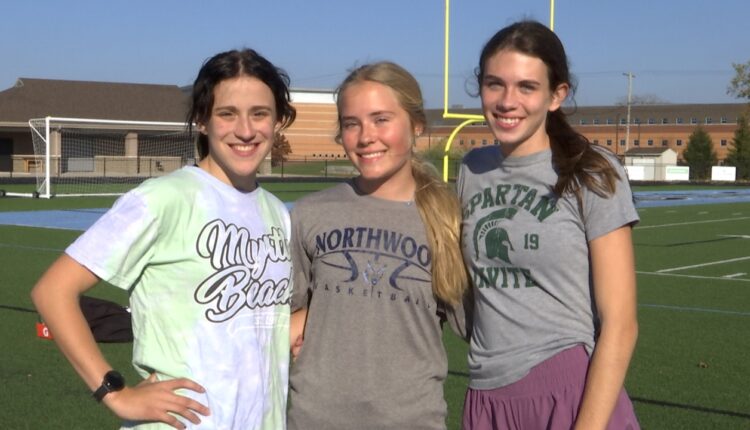 Lansing Catholic’s dynamic trio: How Jones, Pricco, and Roe pushed each other to become the state’s best

LANSING, Mich. (WLNS) – By definition ‘a running buddy’ is someone who pushes you, motivates you and supports you through all the joys and struggles of running – but what happens if you have more than one?

“So – Me, Hannah, and Tessa all run together during practice and during workouts,” said CC Jones. “It kind of simulates an actual race, and other competitors, and so once we get on the field we like to bunch up. By then we kind of split a part if one of us is feeling good.”

Their strategy of running alongside one another is one reason why Jones, Hannah Pricco and Tessa Roe are recording the fastest times of their high school careers.

Or as they refer to it, their formation.

“It’s just kind of like a joke,” said Pricco. “We have a group chat named formation and especially on long runs we’ll be like, ‘Okay – get in formation.'” “I’m on the right, Tessa’s in the middle, and CC’s on the left.”

When Roe was asked about how the group chat came to be she said, “I don’t even remember.” “I think it was CC and she added the military emoji,” as she laughed. “That’s what we call it now, I guess.”

Due to their ‘formation’ the trio was able to dominate in the regional meet at DeWitt. Pricco finished in first place, while Jones finished in second, and Roe was right behind them in third.

“It’s just nice to know that I have people I can run with in practice every day,” said Roe. “I can be up there if I try and that’s what I try to do in races.”

“I didn’t really have anyone my freshman year and it’s just great to see how I’ve improved with having other teammates to run with,” said Pricco.

Out of the three Jones has hauled in the fastest time this year at 18:13 and for someone who says quote they “weren’t the best at it” she also won the Greater Lansing Cross Country Meet this season.

Jones had to learn how to fight through the pain and with one glance to her right she learned how to develop the mental fortitude to do so.

“I have to give all the credit to my teammates,” she said. “Especially Tessa. She pushed me a lot last year and she was always a really good runner. I wanted to be up with her all the time and sometimes I couldn’t. Sometimes I let myself slip and after the state meet last year, I thought it was a pretty disappointing performance. I just told myself no, I’m not going to do that anymore. I want to work for it. I want to better, so I started training more seriously.”

The three of them will run in the Division 3 MHSAA state meet on Saturday at Michigan International Speedway and all of them say they are peaking at the right time, which is what every runner wants once championship season rolls around.

It’s all about ‘enjoyable at this Michigan conference

Indianapolis police buy recruiting billboard in Detroit off I-75