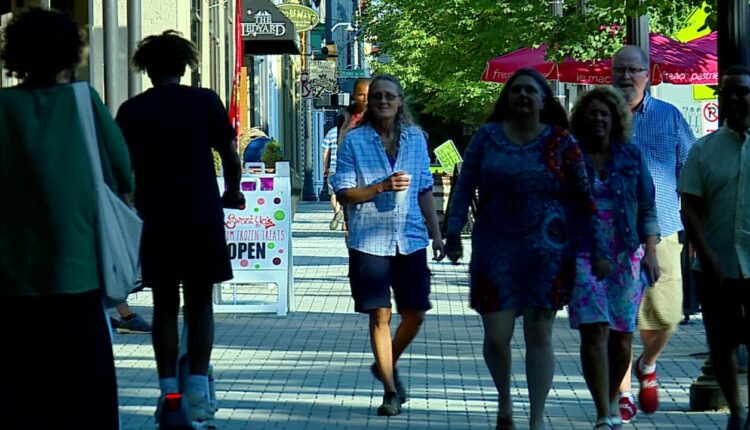 According to ArtPrize’s strategic plan, the event brings in hundreds of thousands of visitors to see the art scattered around downtown Grand Rapids. And those visitors have an economic impact on the area of ​​more than $30 million. So, businesses know they have to be ready to go.

Many business owners say that after a couple of years of challenges, the staffing situation is looking up for them in 2022.

“We brought some employees back and really upped the employees (who are) in when shifts change, just to have more employees on,” said Jessica Alfaro of Sweet Yo’s, a frozen yogurt shop located near the intersection of Pearl Street and Monroe Avenue.

“We’re pretty excited. We benefit now from having multiple locations. In past years, we’ve had to hire more staff for ArtPrize. This year, we are not hiring any temporary staff, we are just kind of doubling down on people from other locations,” Corlett said.

He added that Madcap Coffee sometimes has managerial, or back-office, staff help out with customers during ArtPrize as well. For ArtPrize, Madcap’s downtown Grand Rapids location will also move some of it’s staff outside.

“You’ll see us adapt a little bit in terms of how we are ringing up customers, offer stuff outside. And more quick service, ready to drink products, like that. Try to accommodate people,” said Corlett. “We don’t want to … especially if it’s people coming in from outside and it’s their first experience with Madcap, we don’t want to compromise our standards just because Grand Rapids is seeing an influx of individuals for a short period of time. ”

Flanagan’s Irish Pub owner Ben Stoneman said the pub is well-staffed for ArtPrize this year and they have some special activities planned.

“We are going to do a smoker out front. We did it last year and it was successful. So, we’ll try it again this year,” Stoneman said. “We are going to be able to be open all seven days a week, from 11 in the morning to midnight or later. So, we’re good there.”

The BOB, located on Monroe and Fulton Avenues, reopened its several restaurants and venues just one week before ArtPrize begins. Food and Drink Director Michael Gee said the first weekend that the BOB is back open is proving to be quite busy.

Because the BOB is an ArtPrize venue hosting dozens of pieces of artwork, it will be closed again until opening day of ArtPrize, Sept. 15, so the artists can install their works.

Some businesses have increased security measures to deal with recent safety or harassment issues.

“We have security here every night. It’s just becoming a thing downtown. We have a lot of, we’ll say ‘street people,’ come in at night. And just to make customers feel safe,” said Ben Stoneman of Flanagan’s. “Honestly, as stretched thin as the police have been, they have been helpful.”

Sweet Yo’s had to put locks on the doors to the bathrooms and maintain them for customer use only.

The weekend before the start of ArtPrize, downtown visitors said they like the vibe of Grand Rapids.

“I just like enjoying downtown. Just get the vibe. It’s a nice place to be, enjoying the weather while I can,” said Keyontae Gibson of Grand Rapids.

The Hartley’s from Big Rapids and the Motzny’s from Waterford, Michigan met in Grand Rapids for a show and to enjoy the amenities of the city. Frank Hartley says he used to visit Grand Rapids as a child.

“It has really changed dramatically, and I think for the better,” Hartley said.

“The vibe is, it’s eclectic here. It’s diverse. The perfect place to be on a nice summer evening,” she said.

“This is very nice. A lot of people out, walking the streets, having a good time. this is a great atmosphere,” he said.

Which is just what business owners like Corlett of Madcap Coffee want to hear.