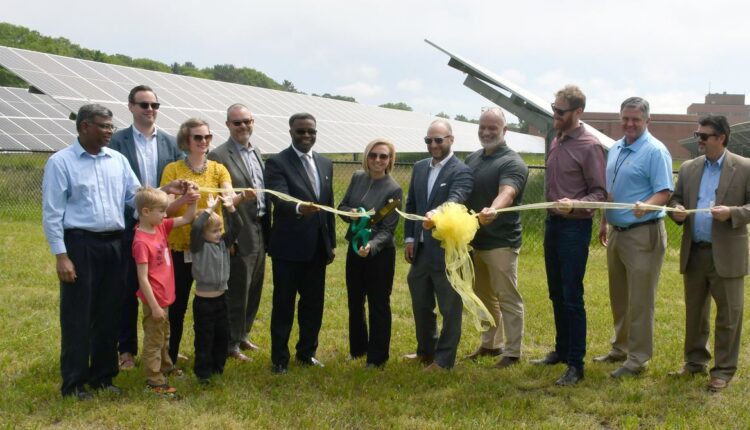 GRAND RAPIDS, MI – Grand Rapids has turned on a new solar array generating about 10% of the power needs of the city’s water filtration plant.

The 0.90 megawatt-generating installation began producing power for the city’s Lake Michigan Filtration Plant on Thursday, June 9, after a ceremonial switch flipping by city leaders and their partners on the project, which is expected to save the city about $200,000 annually in electricity costs .

“Getting more solar installed on city facilities has been a priority of mine for a long time,” said Mayor Rosalynn Bliss.

“Climate change is a crisis and the city is working hard to source 100% renewable energy by 2025. Installing a large-scale solar array at the Lake Michigan Filtration Plant is a huge component of our strategy to achieve that goal.”

The city has a goal of powering all municipal buildings with 100% renewable energy by 2025.

The solar array, which is ground-mounted and covers just under 3 acres of the plant site in Grand Haven Township, is expected to push the city from about 37.5% of that goal to 41%.

City officials say the array will eliminate about 1,000 metric tons of carbon dioxide equivalents. That’s roughly equivalent to removing an estimated 230 passenger vehicles from the road, they say.

The solar array is owned and operated by ES Services Company, which also constructed the array. ES Services is a subsidiary of Consumers Energy Company.

The city, in turn, will pay the company a monthly rent that equates to about $119,000 a year and receive electricity from the installation.

Energy from the solar array would allow the city to purchase less electricity from Consumers Energy. Factoring in annual electricity rate increases, the total net savings over 24 years for the city is $1.55 million, according to city officials.

“The new onsite solar plant at the Lake Michigan Filtration Plant represents another step forward for the city as it commits to using 100% renewable energy for its municipal operations, and CMS Energy is proud to play a role in helping to make this goal a reality ,” said Brian Rich, senior vice president and chief customer officer of CMS Energy, which has Consumers Energy as its principal business.

“This project further supports CMS Energy’s goal of supporting our customer’s success and protecting our planet today and for generations to come.”

In addition to advancing its 100% renewable goal, the solar array will also help the city move forward on its other goal to achieve 85% carbon reduction by 2030 and carbon neutrality by 2040 for all municipal emissions.

Carbon neutral means the amount of carbon dioxide being released into the atmosphere by an entity is offset by the same quantity of emissions removed or eliminated. Carbon dioxide is the most plentiful greenhouse gas that contributes to climate change.

City officials say that if the municipal buildings are powered 100% by renewable energy, they anticipate achieving an 80% to 85% reduction in emissions.

The city has reduced greenhouse gas emissions by 30% since 2008 and is projected to achieve a 47% reduction by 2025 in large part due to the solar array, the biodigester and conversion of all streetlights to LED.

Some animals killed in fire at Nelis’ Dutch Village

5 things we learned about Jan. 6 and Trump from the first hearing ⋆

Opinion: Housing is more than bricks and mortar | Opinion