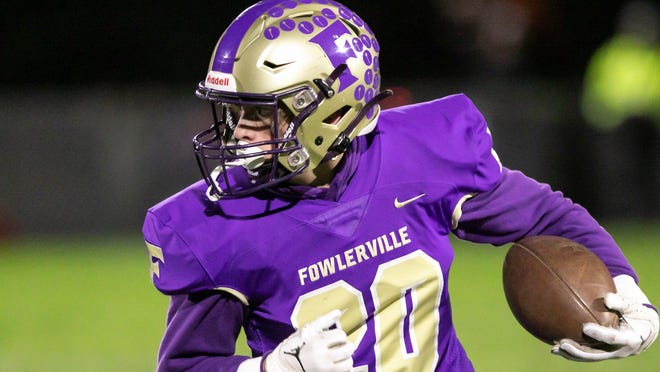 FOWLERVILLE — Lansing Catholic hasn’t looked like a football team that has won two state championships and 14 playoff games the past three seasons.

But despite taking a 2-5 record to Fowlerville Friday night, the Cougars played more like they’re accustomed to in a 41-14 victory over the Gladiators.

After allowing a touchdown on Fowlerville’s first possession of the game, Lansing Catholic scored 41 straight points, leading 34-7 by halftime.

The game began on a promising note for the Gladiators, as Evan Atkinson returned the opening kickoff 75 yards to the Cougars’ 14-yard line. Four plays later, running back Blake Juopperi scored on a 1-yard run with 9:46 left in the first quarter.

“We had a good kick return to set it up and scored,” Fletcher said. “We were definitely excited the way we started.”

Alex Fernandez had a 4-yard touchdown run and threw a 33-yard touchdown pass to Brandon Lewis to give the Cougars a 14-7 lead by the end of the first quarter.

A 1-yard touchdown pass from Lewis to Rabideau in the third quarter extended the Cougars’ lead to 41-7.

Juopperi scored the final touchdown of the game on a 1-yard run with 9:32 remaining in the fourth quarter.

Fowlerville is 3-5 heading into its final game next Friday at Charlotte, which is 7-1 and coming off a 44-34 victory over previously unbeaten Flint Hamady.

Fletcher’s message to his players after the loss was: “Just to keep fighting for each other. We still have one game left. We still have a lot to play for.”

As Long COVID wreaks havoc on people and the workforce, experts call for more support ⋆