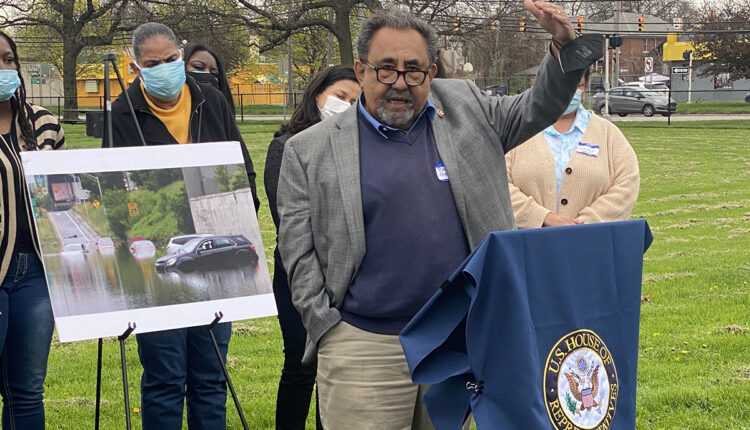 When Stellantis expanded its automotive manufacturing facility last year in an industrial section of Detroit’s east side, residents said health issues among neighbors got worse.

The area doesn’t meet national air quality standards for ozone and sulfur dioxide – two pollutants that contribute to health issues – and those who live there have long attributed their ailments to the byproducts of nearby industry, including a General Motors Co. plant, two metal processing facilities, and congested Interstate 75.

The facility’s increasing footprint prompted the Great Lakes Environmental Law Center to file a civil rights complaint with federal regulators, arguing the state’s decision to grant Stellantis a permit to expand in the low-income and Black neighborhood overburdened by pollution was equal to discrimination. In March, the U.S. Environmental Protection Agency launched an investigation into the permit approval to see if it did constitute racial discrimination.

The scenario has repeatedly played out in Detroit as new or existing facilities seek to increase emissions or expand operations, often in underserved communities of color that already face high levels of pollution. Limitations in state and federal law prevent residents and environmental advocates from doing much about it. But supporters of a federal bill coined the Environmental Justice for All Act say it could provide an answer.

The proposed legislation would allow individuals and organizations experiencing discrimination to seek legal remedies when a disparate impact is alleged to have occurred, like the expansion of the Stellantis facility on Detroit’s east side.

“It’s about fairness, it’s about an even playing field,” said Grijalva, chair of the House Committee on Natural Resources, adding the proposal would “give communities a mechanism to defend themselves.”

Right now, the state isn’t required to consider the cumulative impact of existing pollution  sources in a community, before issuing permits to up emissions. When there are issues, residents and opponents must file federal complaints to seek redress; they can’t take the issue to court themselves.

“Our supreme court has gutted our civil rights law, it’s restricted us from going into court to enforce those rights ourselves,” said Nick Leonard, executive director of the Great Lakes Environmental Law Center. “In order to really pursue environmental justice, and make that a reality, we need adequate legal tools.”

Jill Greenberg, a spokeswoman for the state Department of Environment, Great Lakes, and Energy, said Michigan does not take positions on federal legislation, but stressed the health of the public is always at the forefront.

Grijalva’s proposed bill calls for federal funding to address disparate health impacts and to increase access to outdoor space in urban areas as well as several other programs. It also would establish advisory bodies, including the White House Environmental Justice Interagency Council, to issue an environmental justice strategy.

The proposal was created following a year of public input. It was first introduced in the House in 2020 and reintroduced last year with 88 co-sponsors.

But many Republicans are staunchly against it, protesting during a February hearing that it would hurt the oil and gas industry and overall economy, while creating more red tape for federal agencies by requiring them to conduct more studies before approving permits. Opponents also say it would open the door for more lawsuits from “radical special interest groups.”

During the hearing, Rep. Garret Graves of Louisiana said,“It’s just a dangerous trajectory for us to continue to force this conspiracy of racism on all of these decisions.”

Multiple lawmakers who voiced opposition during the hearing did not respond to BridgeDetroit’s requests for comment.

Grijalva said he plans to push the act through the House Committee on Natural Resources by the end of the summer and put it to a vote.

Advocates and politicians promoted the act in early May as they toured sites of so-called environmental injustice in and around Detroit. The group, accompanied by U.S. Reps Rashida Tlaib, D-Detroit and Debbie Dingell, D-Dearborn, visited Fiat Chrysler Automobiles/Stellantis and the hazardous waste disposal facility U.S. Ecology, among other sites. Tlaib and Dingell then joined Grijalva for a press conference at the Kemeny Recreation Center where Detroit residents of color shared their experiences with pollution.

U.S. Rep. Rashida Tlaib, D-Detroit, speaks at a press conference held May 6, 2022, to garner support for the Environmental Justice For All Act, and raise attention to the environmental justice issues Detroiters face. (BridgeDetroit photo by Jena Brooker)

“I’m wore out,” said east side resident Robert Shobe whose home sits next to the expanded Stellantis Jeep plant.

The site has been a source of great contention for the neighborhood where residents say the noise, air, and odor pollution from the plant is creating, and exacerbating health issues.

Stellantis has received five violations since opening less than a year ago.

Jodi Tinson, a spokeswoman for Stellantis, told BridgeDetroit that the Stellantis plant employs nearly 5,000 people and builds hundreds of vehicles on three shifts each day and “it is a fact” that the plant “emits more emissions than the former Mack engine plant, which employed fewer than 700 people and was a fraction of the size.”

“The Mack plant was designed from the ground up using some of the most advanced technology to minimize emissions,” Tinson added. “When Stellantis chose to build the first new assembly plant in 30 years in Detroit and committed to hiring Detroiters first, we made a long-term commitment to support the community for this and future generations.”

Dolores Perales, an organizer with Southwest Detroit Environmental Vision said there has been  a disproportionate impact on communities of color which she’s experienced firsthand.

Perales was raised in southwest Detroit, a community that is exposed to pollution, traffic, and has high asthma rates. Perales herself was diagnosed with asthma when she was 8.

“I grew up in an environment that poisoned me from the day I was born,” she Perales, holding back tears.

State Rep. Abraham Aiyash, D-Hamtramck, argued environmental injustices are man made, and not an accident.

“It is intentional legislating and intentional decisions made by corporations and governments that impact and harm the lives of people like me,” he said.

Aiyash described walking to school as a kid and having to inhale fumes from an incinerator that burned Canadian garbage.

“This should not be the lifestyle that so many in Detroit have to face,” said Aiyash, who is behind a separate bill aimed at helping protect communities overburdened by pollution.

Yelling over the roar of I-75, Theresa Landrum, a Detroit activist and resident of the 48217 ZIP code, one of most polluted in Michigan, noted more than 40 sources of pollution her community must deal with, gesturing behind her to Marathon’s oil refinery. The facility has accrued multiple air quality violations over the years for exceeding limits for particulate matter and hydrogen sulfide, as well as a gas flare malfunction that released toxic emissions and left residents with sore throats and trouble breathing.

In 2020, Marathon Petroleum Co. was ordered to pay nearly $82,000 in fines and invest hundreds of thousands into safeguards for the community after a flare system malfunction in 2019 that prompted the release of sulfide and mercaptan vapor. The company’s consent order covered eight emission violations on five separate events dating to 2017.

Landrum said the Environmental Justice For All bill would address the cumulative impact of industry that has “plagued Black and Brown people.”

“This legislation is monumental,” she said. “It will give legs to what we know our environmental protection agencies should be doing for the people.”

authored by
First published at https%3A%2F%2Fwww.bridgedetroit.com%2Ffederal-bill-would-help-defend-communities-from-pollution%2F