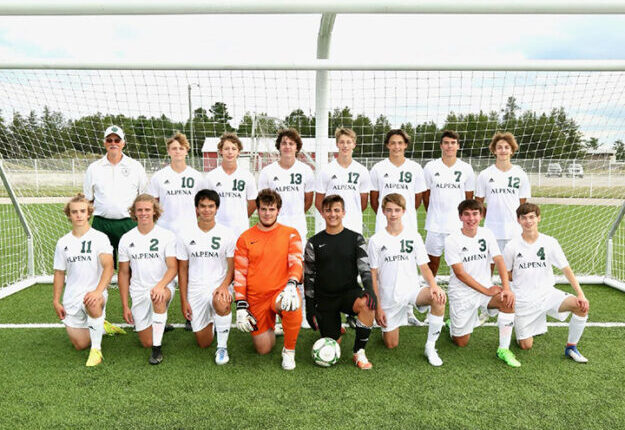 ALPENA — The Alpena High boys soccer team has shown signs of its potential early in the season.

“We’ve got a lot of returners, we graduated five seniors last year…that also means we have a lot of players that played either in starting roles or major minutes that are coming back,” Storch said. “I like the makeup of our team. I’d like us to be a little tougher. I’d like us to be a little hard-working, but we’ve got some technical ability and I think we’re dangerous in the flow of the game and also on restarts.”

Alpena has gotten off to a “decent start,” according to Storch and is 5-3-1 in its first nine games and 2-1 in Big North Conference play. Despite a frustrating loss to Petoskey last week, Alpena has looked strong in BNC play, scoring wins over Traverse City Central and Gaylord at home.

If the strong performances in league games continue, Storch hopes his team can finish in the upper half of the BNC standings when all is said and done.

“I think we can be a real factor in the Big North Conference. Obviously, (Traverse City) West has won the league 12 years in a row and that probably is not going to change. It’s them and then it’s everybody else so we’re waiting to see how that sorts out,” Storch said. “We’re hoping that we can be in the mix with Petoskey and certainly ahead of Gaylord, Cadillac, and Traverse City Central.”

Among the players on Alpena’s 2022 roster are seven returning seniors and three returning juniors. Up front, Alpena has already shown its versatility as four different Wildcats have at least three goals and seniors Gabe Glawe, Jacob Beaubien, Chase Schiller, Austin Townsend, and Jack Cook have been among those in the goal-scoring mix.

In the midfield, Storch was pleased with the play of junior Bennett VanDuinen as well as sophomore Garrett Hamp. Senior Wesley Decker will see time this season in the midfield and Jack Cook, Townsend, sophomores Kaleb Werth, Jack Supiran and Keller Skiba and junior Myles Williams will be in the mix too.

In net, both junior Michael Herrmann and Preston Schuldt have split time and both have played well.

Storch knows his team still has room to improve, but with the experience the Wildcats have, he’s hoping their play on the field leads to the results he knows they can produce.