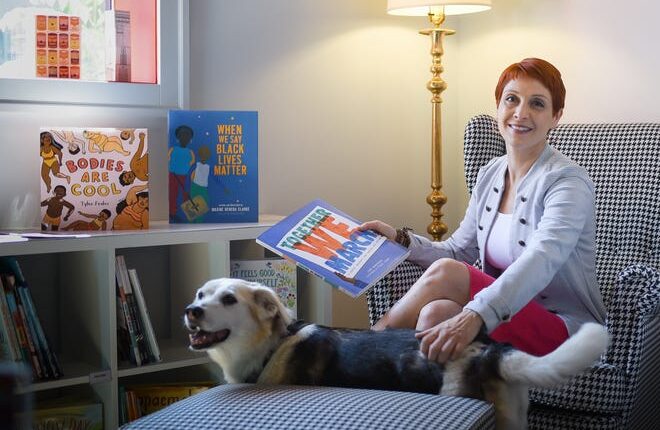 LANSING—Emily Dievendorf could have had a little extra money for the first time in her life, after selling a house she could barely afford. Instead, she opened a bookstore in downtown Lansing — a non-profit bookstore, no less — with the idea of ​​creating a hub for the community for anyone who could use a safe and useful space for knowledge, fellowship and activism.

Dievendorf could have sat out this election cycle, too, still healing after being hit by a motorcycle at a Black Lives Matter protest two years ago.

But Dievendorf has never seen a purpose in being comfortable. As she saw it, there was a need for someone like her as a Democratic candidate in the race for the newly drawn 77th district in the state House, which includes Lansing north of the Grand River, DeWitt, some of Grand Ledge, Eagle Township and Westphalia.

She had no plans to run for the seat, but thought the other candidates lacked what she had — two decades immersed in policy and activism in this community.

Dievendorf’s opponents in the 77th district primary, Aug. 2, are Logan Byrne of DeWitt and Jon Horford of Lansing.

RELATED: For former basketball star Jon Horford, the Lansing area is home. Now he wants to represent it in the state house.

“I never picked a job because it was fun,” Dievendorf said. “I think that civil rights, I think that’s what politics should be — I think politics is supposed to be about representation. And, to me, this is making sure the community is in the office.

You can get a sense of where Dievendorf stands by walking into The Resistance, the bookstore and community space she and partner Fae Mitchell opened last winter on Ionia Street downtown. This is a place built on inclusive ideas and challenging old norms. Racial justice, policing, feminism, celebrating the life and rights of people in the LGBTQ community, of those with disabilities — these are some of the themes on display through literature and art.

“She’s an advocate for LGBTQ, as well as women’s choice, as well as racial equity. And that’s really rare when you see those things together,” said LaShawn Erby, a local activist who notably started the Lansing chapter of the Poor People’s Campaign.

Dievendorf is someone who questions policing in our society and advocates for LGBTQ rights — including her own — but she is not without a well-rounded understanding of other views. Dievendorf, who is bisexual and nonbinary, was raised in Kalamazoo in a Christian right home, her mother a public school teacher, her father a police officer, who she describes as “the best man I know.”

“That doesn’t mean that we haven’t had very difficult conversations over policing over the years,” she said.

RELATED: Election 2022: Candidates for Michigan Representative District 77 in their own words

Dievendorf arrived in the Lansing area in 1997 to attend Michigan State University, swearing she’d never get into politics. But after interning in the state legislature and winning an award for an essay for MSU’s Institute for Public Policy and Social Research, she wound up staying in politics, working for Democrats Alexander Lipsey and Andy Coulouris. Later, she became a lobbyist and executive director for the civil rights advocacy group Equality Michigan, which serves the state’s LGBT community, and currently works as a civil rights and political consultant.

“It ended up being incredibly valuable to learn how everything works,” Dievendorf said of her time in the legislature. “And I became this person that pushes really hard and is a stickler for ethics. But also somebody who knows the value of working strategically. I’m incredibly grateful for an in-depth understanding of the legislative process. And I felt it was important that we had somebody (in the race) who was experienced, but I thought it was even more important that we had somebody who had been from the area for a long time. And I’ve been in Lansing since I was 18.”

Lansing, to Dievendorf, is a special place. A community that has something to it that others don’t.

“The difference I’ve seen in Lansing is that people show up,” Dievendorf said. “People consistently show up to grow Lansing. But not just for right now. It’s for 10 years, 20 years down the line. In every corner of the different things we’re trying to do — whether it’s housing, whether it’s entertainment, all of the different kinds of advocacy we want to do, all the different forms of economic development, people of every age are working to make Lansing the place that they see that it can be, and they’re not doing it for themselves. They’re certainly enjoying it, but they’re putting in the hard work, and they’re putting it in for where it’s going to be, maybe, when they’re not going to be considered cool enough to attend the party. And I admire that so much. I haven’t seen that just about anywhere else.”

Hence the decision to put every extra dime into The Resistance.

“I’ve always been a poor civil rights leader and I’ve never had money,” said Dievendorf, who rents a house in north Lansing. “So it didn’t make any difference. … (I thought) maybe I’ll pretend like I never had it and invest it in something good for the community.”