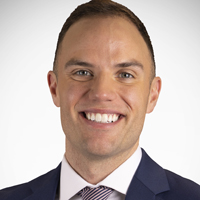 Elliot Grandia, who started at Scripps-owned Fox affiliate WXMI Grand Rapids, Mich., in January, will be able to sleep a little later. Beginning Aug. 8, he will join co-anchor Tessa DiTirro weekdays at 6-9 am on Fox 17 Morning News. Previously he anchored from 4:30 to 6 am

“Elliot brings a refreshing energy and positivity to our viewer’s mornings,” said Dan Boers, WXMI news director. “He grew up in West Michigan — graduated from Rockford and Michigan State University — and has a real connection to what’s important in our community. He’s just as comfortable in the studio as in the field. You’ll continue seeing him in your community telling your stories weekly.”

Grandia got his first taste of news in high school as the anchor for the Beyond the Rock newscast after his TV studio teacher persuaded him to take a stab at being in front of the camera. Elliot graduated from Michigan State University, earning a bachelor’s degree in broadcast journalism.

“I’ve loved anchoring and reporting in my home city since the moment I started and can’t wait to continue growing in this role,” said Elliot Grandia.