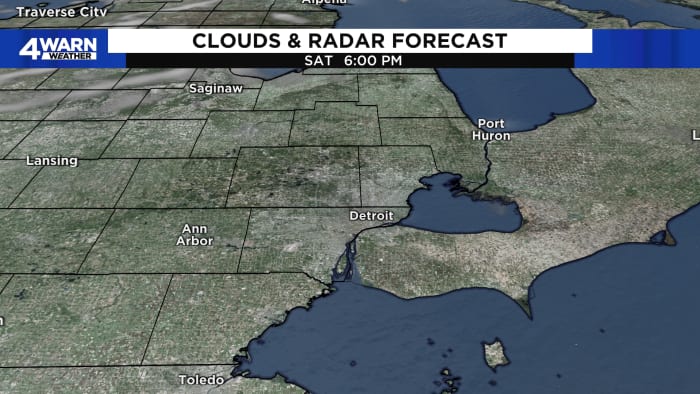 Drier weather moves in for Metro Detroit heading into the weekend

After we finally broke some sunshine working through Friday afternoon, we will keep that trend of sunshine into the forecast as we have throughout the first part of our weekend for Saturday. Expect mostly sunny skies, temperatures will be seasonal heading into the afternoon as most everyone makes it into the lower 80s.

We will keep a little cloud cover in the forecast overnight tonight, sky is going partly cloudy overnight lows dropping into the lower 60s, and we could even see some upper 50s outside of the metro as well.

Changes to the forecast move in to the region as we work into the early portions of next week. As we work into out Monday, we will watch a cold front head into the region by Monday afternoon and into Monday evening. This will bring the chance of showers and thunderstorms. High temperatures make it into the upper 80s by Monday afternoon, but when she factor the humidity it is going to feel just a tad bit warmer than that.

That cold front presses on through the region as we work from Monday night overnight and early on Tuesday morning, so we will keep a chance of rain showers into the forecast for the first part of our Tuesday before a mixture of sunshine and clouds moves into the region. High temperatures cooler behind the cold front only making it into the upper 70s by Tuesday afternoon.

MONDAY: Mostly cloudy skies with a chance of showers and thunderstorms.

TUESDAY: Partly cloudy skies, a chance of rain showers primarily in the morning.

Michigan’s Aug. election results were certified without drama. Will things be as smooth in Nov.? ⋆