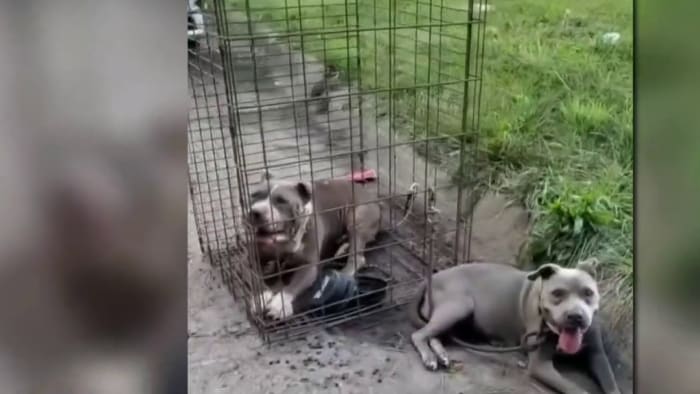 Dogs abandoned by roadside left to die in Detroit

DETROIT – One local rescue group is wondering who left two dogs to die on Detroit’s west side near an open field at Trinity Street and West Outer Drive.

As local 4 reports, the discovery made by Rebel Dogs Detroit isn’t all that surprising after all.

“We got a call from an officer that said there were two dogs that needed rescuing,” said Juniper Fleming of Rebel Dogs Detroit. “We rushed over, and we wanted to see what we could do to help.”

Fleming insists it’s a miracle they were able to rescue a pair of dogs now named Crop Top and Buffalo.

“One of them was in a crate, and the other one was tied up next to the crate,” Fleming said. “The one that was in the crate was barking. Very reactive. Very scared. And he had lesions and wounds all over his body.”

Look closely at the video player above at Buffalo’s skin. You can see how he’s covered in sores, and he has an elbow growth in his arm.

His buddy crop top stayed by his side the whole time.

Fleming said the incident is one of the many examples of dogs being abandoned versus what happened during the initial outbreak of COVID-19.

“We’re finding that as a rescue, at the beginning of COVID, we saw a huge influx of people wanting to adopt dogs which is incredible,” Fleming said. “We were able to rescue and adopt so quickly. Now, we’re getting way more calls about dogs that are found, dogs that people are trying to surrender, and we’re not able to help because applications for adoption and fostering just aren’t coming in at the same speed.”

Despite the harsh numbers, Rebel Dogs Detroit is doing what it can to help as they’ve opened up their own shelter on the city’s westside.

Even their rescues can jeopardize reaching a standstill if more people don’t foster. Regardless, they still want the city to do more about the strays on the street.

Detroit launches campaign to engage more voters ahead of November

KHN’s ‘What the Health?’: A Big Week for Biden