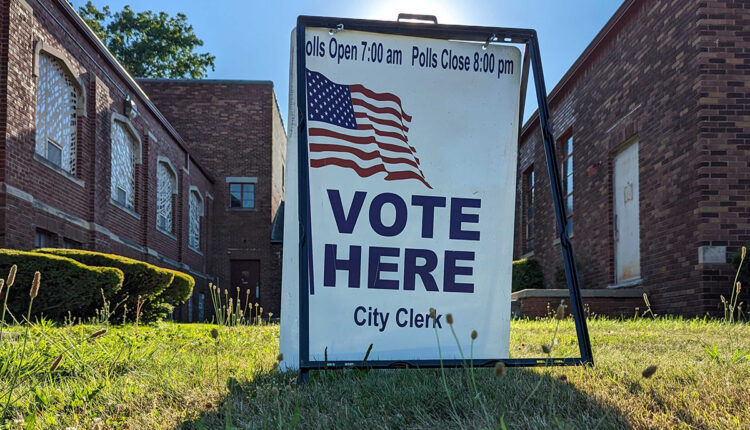 Detroit launches campaign to engage more voters ahead of November

Detroit is stepping up its efforts to register and educate voters ahead of the Nov. 8 election through businesses, colleges, civic groups and sports teams.

The mayor also has committed to using his office to communicate with eligible city voters about how to register and where to cast ballots. Nonpartisan voter registration information will be provided to Detroiters when they contact city departments and was already sent out with July billing statements from Detroit’s Water and Sewerage Department. The city also intends to  update its website with more voting information for residents.

The program, the city said, got underway just before the August primary, with door knocking at 15,000 city residences. Between now and the November race, the Department of Neighborhoods expects to reach out to 100,000 homes during a citywide door-to-door canvass to remind voters of the upcoming election and options available for casting ballots.

“At the heart of our democracy is civic participation, and there is nothing more important we can do than educate citizens about the process – and to make it more convenient for Detroiters to vote,” Duggan said in a statement. “From providing voting information on the city website where citizens can learn more about voting –  to teaming up with colleges and universities to high schools, and employers – Detroit Votes 2022 will make voter registration easier and more accessible.”

Turnout for the city’s Aug. 2 primary was about 15%. Detroit City Clerk Janice Winfrey projected ahead of the election that 12% to 17% of registered voters in Detroit would cast a primary ballot. In 2018, 22% of Detroit registered voters turned out for the primary, the clerk has said.

State Rep. Shri Thanedar, an Indian American, and U.S. Rep. Rashida Tlaib, a Palestinian American, won the two Democratic congressional races and will likely go on to represent the majority-Black city in 2023. Detroit is therefore all but assured to lose Black representation in Congress for the first time in 70 years.

The COVID-19 pandemic also has led state and local voting jurisdictions to encourage early voting and mail-in voting to ensure health and safety.

As a result, Detroit’s voter participation increased by 10% overall and by 250% in absentee voting and 11,729 citizens registered to vote, the city noted in a Thursday press release.

The city has encouraged voter registrations and participation via text message, phone calls and by sending letters to the homes of unregistered voters.

authored by
First published at https%3A%2F%2Fwww.bridgedetroit.com%2Fdetroit-launches-campaign-to-engage-more-voters-ahead-of-november%2F

Dogs abandoned by roadside left to die in Detroit