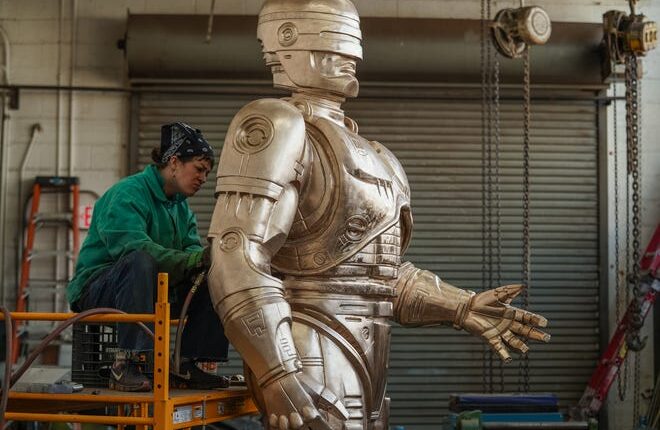 The lengthy story of Detroit’s long-awaited RoboCop statue seems to be edging closer to its final chapter.

The 11-foot-tall bronze statue has been looking for a while for a forever home — and it finally may have found one in Eastern Market, the popular, historic district that’s a hub for food, shopping, restaurants, art galleries and studios and a stunning assortment of murals.

“It’s going to be displayed very prominently in Eastern Market, which already is an amazing center for public art,” said Brandon Walley, a Detroit filmmaker and a key part of the grassroots quest to make the RoboCop statue.

Although he didn’t reveal specifics on the exact site, Walley said, “The plans are made for the location and it’s going to be great.”

An official announcement could happen by the year’s end, according to Dan Carmody, president of nonprofit Eastern Market Corp., who told the Free Press that there are still details to be ironed out on the legal aspects of such a plan.

“Until we have a definitive legal agreement, we don’t have a deal, so we’re still working on that,” said Carmody.

News of Eastern Market as a possible permanent location for the tribute to the fictional pop-culture icon broke Tuesday in Crain’s Detroit Business.

More than a decade ago, the origin story began for the much-publicized statue of the half-human, half-cyborg Detroit cop at the heart of the 1987 sci-fi cult classic movie “RoboCop.”

The spark for the idea came in 2011, when a Twitter message sent to Detroit’s then-mayor, Dave Bing, suggested that a RoboCop statue could serve as an ambassador for the Motor City, much like the statue of Rocky (the lead character in the 1976 boxing drama “Rocky”) is for Philadelphia.

As the tweet went viral, Imagination Station, a community arts nonprofit, started a Kickstarter campaign that ended up raising more than $67,000 for a potential statue.

Thousands of fans expressed their support for the effort, including the 1987 film’s star, Peter Weller, who made a comedy video for Funny or Die that endorsed the project.

Before work could begin on the project, numerous legal and technical hurdles had to be overcome, including obtaining copyright permission and navigating the complex mold and model-making steps leading up to the pouring of the casts.

Art conservation expert Giorgio Gikas, known for restoring iconic local works like the Spirit of Detroit statue and many more, oversaw the making of the statue at Detroit’s Venus Bronze Works.

In May 2018, Imagination Station revealed that the statue would be installed on the grounds of the Michigan Science Center. Then came the COVID-19 pandemic, which resulted in a massive economic hit to museums across the country.

By early 2021, RoboCop was officially again without a home. The Michigan Science Center released a statement explaining that “given the pandemic’s unprecedented pressures, MiSci’s resources must now be entirely focused on our core mission of serving Michigan’s students and families.”

Brandon Walley, who’s helped lead Imagination Station’s efforts, said that even if an announcement is made before next year, any installation process would have to wait until the weather turns warmer in 2023.

After devoting so much time to making the RoboCop statue a Detroit landmark, he’s in no mood to rush. “We’ve just been kind of taking our time and doing it slowly,” he said. “It’s kind of like, well, after a decade, let’s just make sure we finish this off right.”

US Ecology violation fuels air and groundwater concerns for neighbors