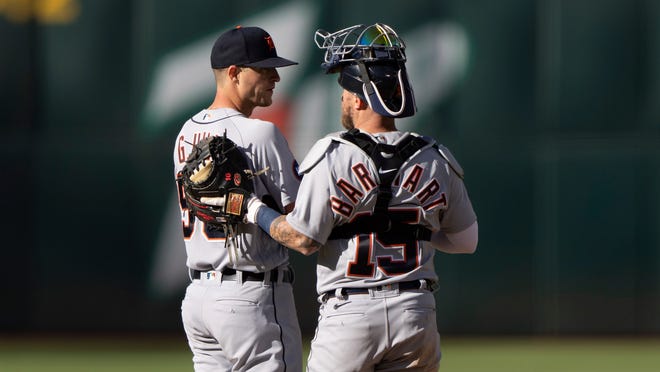 The 33-year-old completed three innings on 55 pitches against the Minnesota Twins, but while the Tigers were batting in the bottom of the third, left-handed reliever Tyler Alexander began warming up in the bullpen.

“He told our staff that his tricep was bothering him, so we took him right out of the game,” manager AJ Hinch said after Saturday’s 8-4 loss. “I don’t think he’s one that hasn’t pitched through pain. I know if he’s going to tell us, that means it’s bothersome. The evaluation says exactly that, right behind the elbow in the tricep area.”

Pineda will receive an MRI on Sunday. He seems likely to end up on the injured list.

“I personally don’t think Michael is going to make his next start,” Hinch said, “but I’m not a doctor.”

With Pineda injured, the Tigers have two healthy starting pitchers on the 26-man roster: Tarik Skubal and Drew Hutchison. Rony García wants to be activated to start Sunday against the Twins. If Pineda ends up on the injured list, Alexander would be the leading candidate to take his spot in the rotation.

Earlier this season, Pineda exited his May 14 start against the Baltimore Orioles with a fractured right middle finger. The nine-year MLB veteran was placed on the injured list May 15 and didn’t return to the Tigers until July 1.

“Coming back from the finger, everything felt good, but when I tried to throw my slider, (my elbow) started bothering me a little bit,” Pineda said. “That’s when I started dealing with that. It was only with the slider, but then it got worse, worse and worse. Today was very tough for me.”

In the second, Pineda threw 12 pitches and recorded two strikeouts. He retired three of four batters in a 13-pitch third, as Carlos Correa cranked his 88.7 mph four-seam fastball into the visitor’s bullpen in left-center field.

He struck out three batters and did not allow a walk.

Entering Saturday, Pineda had a 5.22 ERA with six walks and 20 strikeouts over 39⅔ innings across nine starts. He allowed eight runs across two innings in his July 16 start against the Cleveland Guardians, the Tigers’ final game before the All-Star break.

“I’ve dealt with a lot of injuries,” Pineda said. “Before I had Tommy John surgery, but this is a little different.”

Frustrated with Lansing City Council, a group of residents form ‘The People’s Council’