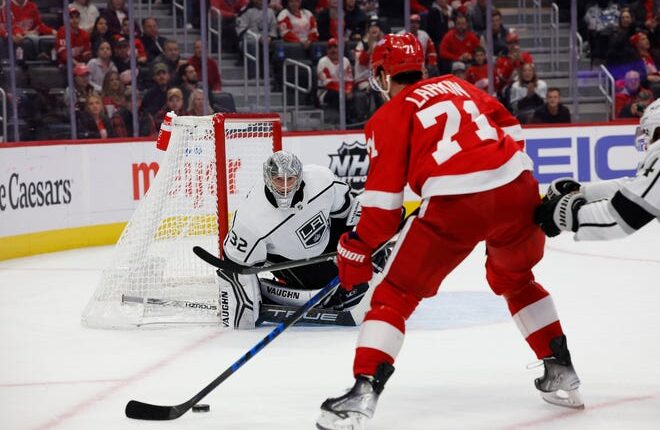 Where: Crypto.com Arena in Los Angeles.

Game notes: The Kings, led by former Red Wings assistant Todd McLellan, are one of the league’s hottest teams (other than the Bruins and Golden Knights). LA has won five of it’s past seven and allowed more than two goals just twice in that span — five goals to the Dallas Stars in a Nov. 1 loss and four goals on Tuesday in a win over the Florida Panthers.

CALIFORNIA DREAMIN’:Red Wings weighed by ‘another lesson’ as they head to California

The Kings have also gotten consistent scoring from 2017 first-rounder Gabriel Vilardi (No. 11 overall), who has four goals over the past seven games, and 10 in all this season to lead the roster. The former Windsor Spitfire is well on his way to topping his career goal total — he entered the season with 18 scores in 89 games over three seasons. (Though he hasn’t had a multi-goal game this season.)

Left wing Kevin Fiala has also proved a nifty offseason pickup (via trade from the Minnesota Wild); the 26-year-old has four goals and 11 assists to tie for the team lead in points.

Veteran goalie Jonathan Quick — who made his NHL debut in 2007-08, the same season the Wings last won the Stanley Cup — got the start for the Kings when they visited Detroit on Oct. 17 and stopped 29 of 33 shots for an overtime win. He’s also been in net for most of the Kings’ hot run, so expect him to start again; Quick is five wins shy of passing Tom Barasso for the third-most wins by an American goalie. (MSU’s Ryan Miller is No. 1 all-time, with 391.)

The Wings are hoping for a return from Tyler Bertuzzi, who has been out since Oct. 15 with a broken hand. The forward has three goals and an assist in seven career games against the Kings.

Following Saturday’s late game, the Wings will continue their four-game road trip with a jaunt down I-5 to Anaheim, though they won’t face the Ducks until Tuesday night. The Kings, meanwhile, will head north for a four-game stint against their Canadian division rivals (and Seattle) beginning Monday in Calgary.

Shutting media out of campaign events is ‘counterintuitive,’ ‘anti-democratic’ ⋆