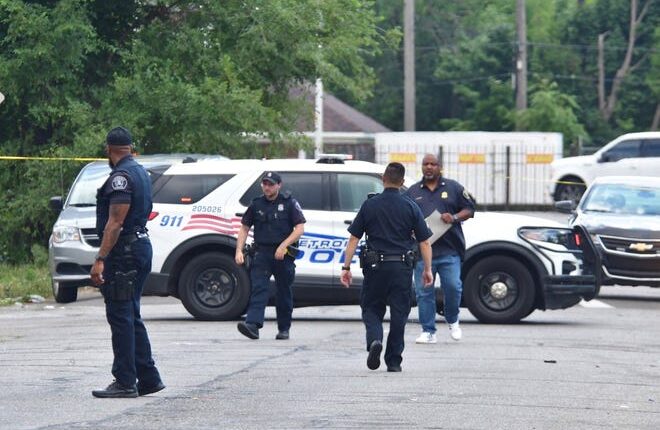 Police are investigating the second mass shooting in less than a week in Detroit.

One person is dead and four are wounded in a shooting Saturday morning near Gratiot and Saratoga on the city’s east side, Detroit Police Sgt. William O’Brien said. The four wounded were taken to the hospital, he said.

At a media briefing at the scene, Detroit Police Deputy Chief Tiffany Stewart said the deceased person is a man and his name and age are now known. Two of the victims are in critical condition and two are in temporary serious condition and they range in age from 35 to 76 years old.

Stewart said police received a report of shots fired and arrived at the scene about 10:45 am They found one person outside a house she called “a known narcotics, vacant location” and heard multiple people screaming inside the house, she said.

Stewart said a possible suspect fled on foot west bound on Saratoga, and encouraged people with information to call Crime Stoppers at 1-800-SPEAKUP to report information anonymously or call the Detroit police homicide unit at (313) 596-2260.

“We’re still looking for additional information, video assets, if the community has any information,” Stewart said. “I’m sure they’re tired, we’re all tired as this is exhausting. This is what, the second mass shooting in Detroit when we have multiple victims in the span of a couple of weeks.”

On July 31, a mass shooting near Coyle and Plymouth on Detroit’s northwest side left two people dead and six injured. The shooting unfolded when the homeowner was angry over people attending a birthday party across the street, Police Chief James White said.

On Wednesday, Winston Kirtley Jr. was arrested in the 36th District Court on charges including first-degree murder and assault with intent to murder in connection with the shooting.

Other recent mass shootings in Detroit include a brawl in May that led to four people being shot; a July 2021 shooting outside an eastside banquet hall that left six wounded; and on April 2021 candlelight vigil in which four were shot.

Despite the lateness, through Monday, there were 542 nonfatal shootings and 176 homicides in Detroit so far in 2022, declines of 5% and 15%, respectively, over the same period last year, officials said.