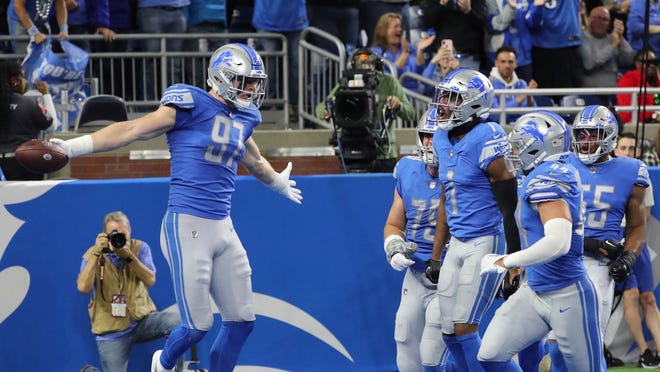 Maybe trading TJ Hockenson wasn’t such a bad idea after all.

The Detroit Lions beat the Green Bay Packers in their first game since sending Hockenson to the Minnesota Vikings at last week’s NFL trade deadline, and Hockenson’s replacements accounted for both Lions touchdowns in the victory.

“It was good to see,” Lions coach Dan Campbell said. “I thought they blocked well, as well. They helped us in the run game. We knew that was going to be a hard, physical game, and look, that’s a good defense. They do a lot of different things. They have multiple fronts. They have multiple coverages. But I thought the tight ends, they did, they stepped up and did exactly what we needed them to do for this game.”

The Lions traded Hockenson, their leading receiver entering the week with 395 yards, to the Vikings for a swap of draft picks in a move Campbell insisted could make the team stronger in some areas.

LIONS GRADE:Detroit Lions grades: Defense gets high marks all around in win over Packers

The Lions struggled to move the ball consistently most of Sunday, but finished with 117 yards rushing on 31 carries and spread the workload at tight end between Brock Wright, James Mitchell and Shane Zylstra.

Zylstra, elevated from the practice squad on Saturday, opened the scoring on a 1-yard touchdown catch with 15 seconds left in the first half. Mitchell, a rookie fifth-round pick out of Virginia Tech, caught his first career touchdown on third-and-goal from the Green Bay 3 on the second play of the fourth quarter.

Wright did not have a catch, but was a key cog in the Lions run game.

“It’s really exciting,” Lions quarterback Jared Goff said. “Shane’s a guy that we’ve relied on for two years now at times. And then James kind of coming off his injury has kind of come into his own now. So seeing them both through practice and the last handful of weeks, and getting their chances today are exciting.”

Goff completed just 14 of 26 passes for 137 yards in his first game without Hockenson, one of his most trusted receivers. He threw one interception and nearly several others, but made two big throws on the Lions’ second touchdown drive.

On third-and-6, Goff whistled a pass to Amon-Ra St. Brown between defenders for 25 yards to the Green Bay 16. Three plays later, he looked off his first read, St. Brown, and found Mitchell alone in the end zone for his score.

Mitchell finishes with two catches for 8 yards. Both of his catches went for first downs.

“Obviously TJ was a big part of our offense and I wish him the best,” Mitchell said. “But it’s just been a next-man-up mentality, and we’ve got the guys in the room that have the right mindset to really take that challenge on.”

“I felt like I liked where we were at, and I thought we would convert that,” Campbell explained of his second fourth down attempt. “But if we did not, I had three timeouts in my pocket, and yeah, our defense was playing pretty good. So I just felt like that was the way to go.”

The Packers drove deep into Lions territory on the ensuing possession, but Aaron Rodgers threw four incompletions from the 16-yard line to end the game.

The Lions nearly got a stop a few plays earlier, when Rodgers completed a fourth-and-2 pass to Samori Toure for 32 yards. Jeff Okudah forced a fumble as Toure tried to advance the ball after falling to the ground to make the catch.

Okudah and safety DeShon Elliott lunged to recover the fumble, but the ball squirted out of Elliott’s hand and Okudah was out of bounds when he gained possession of the ball. Elliott, who is playing with a splint on his broken right index finger, said the injury prevented him from making a recovery.