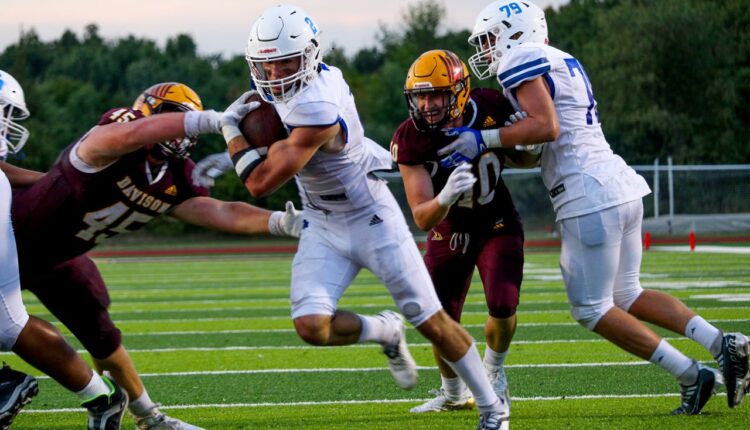 Detroit Catholic Central watched Davison score an 80-yard touchdown on the first play of the game Friday night and the visiting Shamrocks figured, “why not us?”

DCC scored five touchdowns that covered at least 35 yards with three of them going for 69 or more in a 44-34 victory at Cardinal Stadium.

Nobody did more damage than senior running back Evan Haeger, who scored a career-high four touchdowns on runs of 48, 77, 1 and 80 yards.

“I feel like not many people can catch me,” said Haeger, who will play baseball at Alabama next year. “That’s the big thing, just getting past the one linebacker. I feel like once I do that, I’m in a good spot.

“We can be really explosive. You saw our wide receivers. I’m just so proud of our guys. We’ve got the quarterback, the athletes to take our shots.

“It’s a beautiful thing. If the line opens up, I can bust loose.”

What made things demoralizing for Davison was how quickly DCC would strike after taking possession of the ball.

After DCC forced Davison to punt late midway through the first quarter, Haeger promptly ran 48 yards for a touchdown to tie it 7-7. When the Shamrocks forced another punt less than five minutes later, Haeger went 77 yards for a TD on the very next play to give DCC the lead.

Five plays after the Shamrocks forced another punt, quarterback Beau Jackson hit Derrick Lee with a 35-yard TD pass to make it 27-14 at halftime.

On the third play of the second half, Jackson hit Brady Blakita with a 69-yard TD pass and then one play after Davison’s Tyler Dosh recovered a fumble and took it to the end zone, Haeger went 80 yards to make it 41-28.

Are you seeing a trend here?

“He was a load,” Davison coach Jake Weingartz said of Haeger. “We couldn’t tackle him and offensively we were very inconsistent. We had at least two drives where we got inside the 10 and came away with nothing.

“We got a great play on defense, it’s a one-score game and two plays later (Haeger) takes off and kind of really shuts the door on that comeback.

“We have to be more consistent but obviously that was a really good football team coming off a loss. But hopefully we’ll see them again in the postseason.”

Himmelein completed 24 of 41 passes for 351 yards and two TDs. Armstrong had seven catches for 152 yards and two touchdowns while Henry Carstarphen III had five receptions for 85 yards and another TD.

Bryce Fortune led the Davison defense with 10 tackles. Jaxen Clark had six tackles and forced the fumble that led to Dosh’s TD,