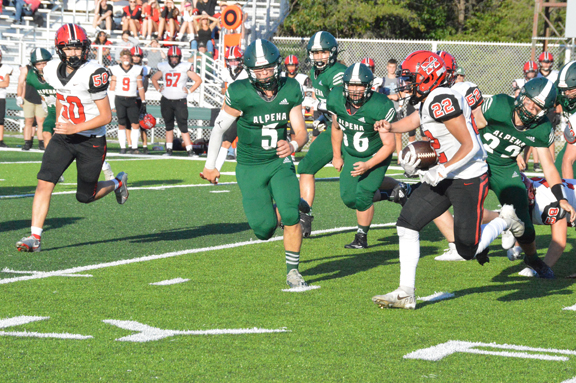 ALPENA — The Alpena High football team narrowly came away with its first win of the season on Thursday, scoring a late touchdown to beat Marquette 18-16.

“This win feels amazing!” Alpena coach Eric Mitchell said. “I’m so happy for the kids, we battled adversity all night and when the bad things happened we pushed right through.”

With three minutes left, Wildcats quarterback Jake Zann completed two passes for 40 yards and finished the drive with a rushing touchdown on the QB sneak to give Alpena an 18-16 edge.

The Redmen drove to the Alpena 40-yard line on the ensuing drive when they were forced to go for it on fourth down. Alpena’s Joe Sheridan got to the Marquette quarterback and sacked him, securing the win for the home team.

The first quarter started and finished slowly for each team as neither put points on the scoreboard. Alpena’s defense came out strong to start after Nic Geister and Sheridan each recorded two tackles for loss on Marquette’s first possession.

Alpena started with the ball to begin the second quarter and finally found its way to the end zone.

After converting three straight third downs, the Wildcats had all the momentum, cashing in for the score when Kaleb Donajkowski broke off a 25-yard run to paydirt to give the Wildcats their first lead and the first TD of the season and a 6-0 lead.

The Wildcats’ defense continued to dominate until the latter stages of the first half. That’s when Marquette’s Peter Closner caught a seven-yard TD pass and Marquette added the extra point to take a 7-6 lead.

With less than two minutes to go before halftime, Brady Niedzwiecki led a Wildcats’ drive after catching a 34-yard pass, then finished it by catching a 25-yard scoring spiral right over the defending cornerback.

Alpena failed on the two-point conversion but still had a 12-7 lead.

Marquette bounced back just before halftime, driving downfield and kicking a field goal to pull with 12-10 at the break.

The Redmen got the ball after halftime and didn’t let that opportunity go to waste. Closner got into the end zone for a touchdown again, giving Marquette a 16-12 lead.

Alpena’s Brady Pagels had a phenomenal second half that started with an interception, giving the Wildcats the ball back and another chance to score. On offense, Pagels caught three passes all resulting in first downs with a gain of 36 yards on one of them.

Zann was 21 of 31 for 271 yards with a passing and a rushing touchdown. Pagels had 10 receptions for 130 yards and Niedzwiecki had five receptions for 93 yards.

“We did a great job of taking what they were giving us,” Mitchell said. “Jake (Zann) obviously had a phenomenal game, but we really improved on what we needed to focus on after last week.”

MSHS makes another trek downstate next week when it faces Traverse City Central at 7 pm next Saturday.