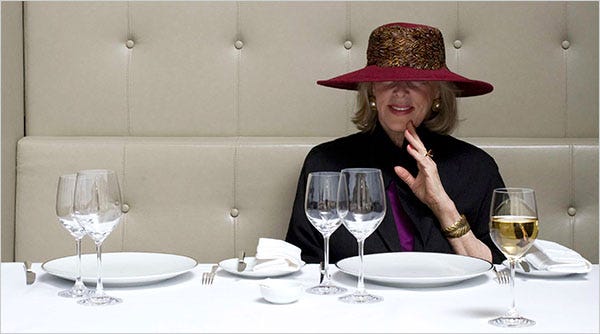 Greene earned her stardom as New York Magazine’s first restaurant critic, a position she held for more than 30 years. She didn’t set out to embark on a career in food writing. Initially a freelance writer and reporter at the New York Post, it was her inimitable voice and poetic writing that Clay Felker drew to Greene. It’s what inspired the magazine’s founding editor to tap her as one of its original editorial staffers.

As the magazine’s restaurant critic and columnist, Greene brought a fresh perspective to food reporting. She elevated the tone of the traditional criticism and looked beyond the plate, taking readers into the dining room through detailed descriptions of fellow diners and waitstaff that personify the restaurant at hand. Through sultry metaphors, she added sex appeal to her dining experiences, a style that would later inspire her moniker as the Insatiable Critic, and a New York column and independent blog of the same name.

Greene was somewhat of a Carrie Bradshaw decades before Candace Bushnell penned The New York Observer column that would inspire the HBO hit series “Sex and the City.” Through her 2006 memoir, “Insatiable: Tales From a Life of Delicious Excess,” she became as known for her rendezvous with larger-than-life celebrities and star chefs as she was for her restaurant criticism itself. There were earlier books, too, including, “Bite: A New York Restaurant Strategy for Hedonists, Masochists, Selective Penny Pinchers and the Upwardly Mobile” (Norton, 1971); New York Times best sellers “Blue Skies, No Candy” (William Morrow and Co., 1976) and “Doctor Love” (St. Martin’s Press, 1982); and “Delicious Sex, A Gourmet Guide for Women and the Men Who Want to Love Them Better” (Prentice Hall, 1986).

But well before her national acclaim and even before she took NYC by storm, Greene’s rise to stardom began in the Detroit area.

Born in Detroit, Greene was educated in the Detroit Public Schools system and went on to earn a bachelor’s degree in English from the University of Michigan. Greene’s earliest work was published in Michigan, including articles for the Detroit Free Press.

Greene’s Midwestern sensibilities showed in her philanthropic efforts. As co-founder of Citymeals on Wheels alongside James Beard, Greene called on notable industry pals to donate funds to homebound elderly New Yorkers on weekends and holidays, which was outside the operating hours of Meals on Wheels.

“Our modest funds bought Christmas dinner for several thousand elderly neighbors who would otherwise have gone without,” she wrote in a blog on insatiable-critic.com. “Throughout the city — in Harlem and Chinatown, in Bay Ridge, on Staten Island, on the Upper East Side, centers opened their doors to cook the meals we’d bought often with volunteers.”

Since its founding, the organization has delivered more than 65 million meals to food-insecure elderly.

“Gael could not live with the idea that a city of such abundance and extraordinary food could not feed its oldest and most frail,” Citymeals on Wheels founding Executive Director Marcia Stein wrote in a statement. “For four decades, she used her celebrity, creativity, and genius to make sure there would always be a nutritious meal at the door for them, every day of the year.”

In 1992, Greene was recognized as Humanitarian of the Year by the James Beard Foundation.

More:Here are the metro Detroit restaurants and chefs semifinalists for James Beard Awards

“Forty years ago Gael’s commitment to the homebound elderly inspired me,” Citymeals on Wheels board co-president wrote in a statement. “It still does and it always wills. May she rest in peace.”