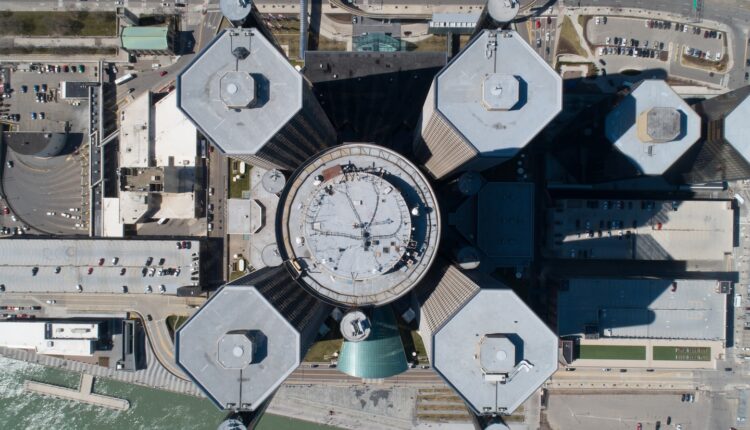 GM trucks parked at the former site of the Palace of Auburn Hills outside Detroit. The trucks are waiting for missing computer chips. (Brian Day/For The Washington Post)Comment on this story

DETROIT — Even Motor City is running short of cars these days.

Rental counters at the Detroit airport have run out of vehicles recently. Dealerships all over town are reporting scarce inventory. And buyers are facing months-long delays and soaring prices before they can get their hands on a new truck or SUV.

The root problem is the same across the country — a global deficit of computer chips that has forced automakers to slash output, causing shortages of new and used vehicles. But the predicament feels particularly offensive here, Detroiters say.

“This is an auto manufacturing city. It shouldn’t be short of cars,” said Benyam Tesfasion, a cab driver who has been busy shuttling travelers from the airport to pick up rental cars at locations 10 or 20 miles away. Another feature of his daily travels, he says, is driving past giant parking lots where automakers are stockpiling newly manufactured cars that are still awaiting a few final chips.

Detroit’s experience shows how thoroughly the nearly two-year-old semiconductor shortage has upended manufacturing — and foisted change on one of America’s most beloved consumer markets.

“It may be the biggest disruption we’ve seen since the 1970s and the fuel crisis,” said Matt Anderson, a transportation historian at the Henry Ford museum complex in Dearborn, referring to the tumultuous period that forced car companies to make more fuel- efficient vehicles.

The chip shortage “is the kind of thing that my successors I’m sure will be studying about in future years,” he added.

Gone are the days when buyers could drop in on a dealership and drive home in a cherry-red convertible packed with their favorite features. Buying a car now means placing an order and waiting, sometimes for months, for the vehicle to arrive.

Also gone are the days when buyers could count on finding affordable wheels. The average US list price for a new car has risen by 20 percent over the past two years, to $45,975, according to data provider Cox Automotive. The average for a used car has soared even more — by 40 percent, to $28,012.

Those spikes have been a major factor fueling inflation, which hit a 40-year high last month. A new car is increasingly “a luxury product for wealthy people,” said Charlie Chesbrough, senior economist at Cox Automotive. “For a $60,000- or $70,000-a-year household, you can’t afford a new car payment.”

The global auto industry produced 8.2 million fewer vehicles last year than it would have without the chip shortage, according to the consulting firm AlixPartners. And the outlook for 2022 remains bleak, with automakers projected to sell just 14.4 million new cars in the United States, down from roughly 17 million in 2019.

A year ago, Chevy dealer Paul Zimmermann had about 700 new cars for sale on his lot just outside of Detroit. Today he has about 25.

Before, “if you were a customer, you could go look at a black blazer or a silver blazer. A white one. One without a sunroof. One with a sunroof. Now there’s hardly any,” said Zimmermann, who bought into the dealership in February 2020. “So there’s really no ability to shop in person.”

That has changed everything about the operations of the dealership, called George Matick Chevrolet, which opened in 1967 and ranks among the largest Chevy showrooms by square footage in the United States.

Instead of dropping in to browse available vehicles, customers now place orders and wait, sometimes for several months, for their cars to arrive. Instead of working the showroom floor, sales staff now spend hours tracking their customers’ vehicles online, searching to see when they move out of production and become available for pickup.

On a recent Monday morning, the dealership had 183 cars in General Motors’s system that were nearly complete but still missing some final components. GM has coined a new term for those, Zimmermann said — “build shy” — because they are built shy of parts.

That’s changed the process of buying a car, which is often an emotional decision, Zimmermann said.

“In the absence of that,” he said, “I think that prevents some people from actually making the decision.”

The Detroit Pistons haven’t played at the Palace of Auburn Hills, a suburban arena, since 2017, and the building itself was demolished in 2020. But the parking lot on a recent Thursday was occupied by roughly 2,000 newly built GM trucks, which Chevy Dealers said they were missing chips. Security guards declined to comment.

Asked about the lot, David Barnas, a GM spokesman, pointed to the company’s recent announcement that the chip shortage and other disruptions had left it with 95,000 unfinished vehicles, which it aims to complete and sell to dealers by year-end. GM is holding the vehicles “in secure lots” near its factories, Barnas said. Over the long term, the company is racing to reduce the number of unique semiconductors it needs to ensure more reliable supplies, he added.

Similar fleets of unfinished cars are stashed all around the Detroit area and beyond. An auto-industry executive said he recently saw thousands of trucks parked around a GM factory in Silao, Mexico. A former factory employee told him the vehicles were missing chips.

In recent days, a lot behind a low-rise office park near Ford’s Dearborn headquarters held about 50 F-150 trucks with new-vehicle stickers attached. Security guards told The Washington Post that Ford owned the vehicles and that the lot, which can hold about 1,200 cars, had been full a few days earlier.

Ford spokesman said Deep did not address questions about those trucks but said that “the entire industry has been managing global commodity issues and chip challenges for more than two years.”

“We continue to work to get our vehicles to our customers as fast as we can. … It remains fluid,” he said.

The problem is indeed hitting most automakers. Tesla was the only major company to increase US sales year over year in the first half of 2022, with Honda, Nissan and Volkswagen all suffering drops of more than 30 percent due largely to supply problems, according to Cox Automotive.

The shortages are forcing Detroit-area buyers to compromise — even the ones who spend their days building cars for a living.

Ahyana Elliott, a factory worker at a Chrysler facility on the east side of Detroit, is in the market for a new vehicle. A car enthusiast since childhood, she already owns two Corvettes and a Camaro but wanted a “winter car” that can handle the Michigan snow, she said while browsing vehicles at Bob Maxey Ford, a downtown dealership near the Detroit River.

“My dad said, ‘Never have a reason you can’t get to work. If one car doesn’t start, have another,’ ” said Elliott, who spends her free time meeting up with fellow car aficionados in the local Corvette Club.

She had her sights on a new Ford Bronco but heard that the wait could be a year or more. So she’s now perusing used cars instead, but the high prices and rising interest rates are giving her sticker shock. There isn’t much choice on dealer lots, either.

“It’s horrible. There is nothing available,” she said.

At a Chevy dealership in suburban Auburn Hills, Lauren Fisher was getting ready to buy out the lease on her Equinox SUV rather than attempt to score a new car.

“With the car that I’m leasing right now, I got everything I want: leather seats, sunroof, heated seats and steering wheel,” she said. “If I were to go lease that again, I guarantee you I’m not going to find that. I’m going to have it built or it’s going to take forever to get it.”

Labor shortages and scarce supplies of materials other than chips are also stalling production at carmakers and suppliers, but chips are the most stubborn problem, industry executives say.

When an automaker is missing one piece of the puzzle, it can suddenly halt production and force dozens of suppliers to idle their factories, leaving everyone frustrated, said Thomas Kowal, president of Seraph, a global consulting firm with Troy, Mich., offices that have been busy advising carmakers and suppliers how to navigate the shortages.

An automaker might suddenly tell suppliers, “Hey, we don’t need to run production on Friday,” Kowal said. Then on Saturday it might demand that suppliers haul their workers in to churn out parts over the weekend. “It’s like it’s a yo-yo, constantly,” Kowal said.

Uber driver Ljupco Stefanovski, who used to work as a porter at a Chrysler plant, said he has seen this disruption when he drives Ford workers to and from their shifts at a factory in Wayne. Sometimes when he picks them up they say they’re being sent home early. “There’s no chip, no work,” they tell him.

Some auto executives also bend his ear about chips. “A couple months ago I drive one guy — He worked for Ford, he worked for Kia, Hyundai,” recalled Stefanovski, who immigrated to the United States from North Macedonia. “He said, ‘Why we don’t build [chip] factories here, so we’re not going to have that problem?’ ”

Stefanovski is renting his car through an Uber program because he can’t afford to buy one.

“You can’t even think to buy the car anymore — even the used car go 40 percent up,” he said. “These two, three years, everything is like backward. It’s not the same anymore.”

Between the Shows | Features

A promising cancer remedy, made in Lansing with particle accelerators