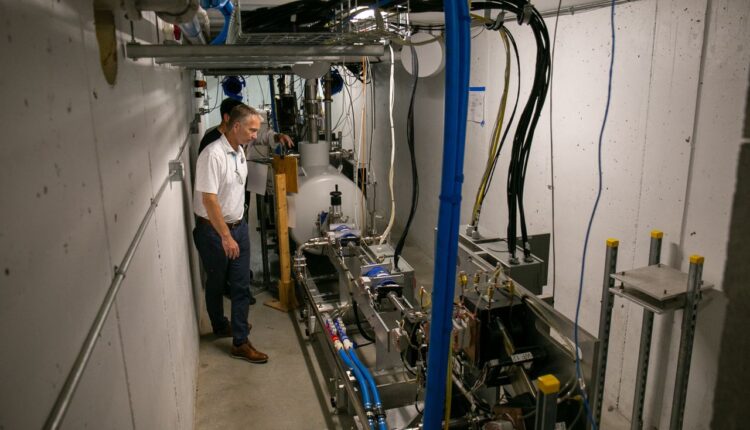 A promising cancer remedy, made in Lansing with particle accelerators

Actinium-225 is a silvery metal isotope that barely exists on Earth.

It’s also an incredibly promising cancer treatment, but researchers don’t know its full potential because there simply isn’t enough of it for large-scale clinical trials.

A Lansing company aims to fix that. Niowave has begun producing actinium-225 using a superconducting linear accelerator in a facility less than a mile from the state Capitol.

It’s only small quantities for now, but Niowave has inked a $5 million deal with Fusion Pharmaceuticals and expects production to ramp up quickly over the next year and a half.

Worldwide, there’s probably 2 curies of actinium-225 between Russia, the US, Germany and Canada, said Mike Zamiara, Niowave’s president. A curie is a unit of measurement for radioactive materials, any quantity of an unstable isotope that decays at a rate of 37 billion disintegrations per second

“We’ll be making one curie a week,” Zamaria said.

Making a profit from particle accelerators

Niowave, which is housed in the former Walnut Street School and has facilities near Capital Region International Airport, spun off from Michigan State University’s National Superconducting Cyclotron Laboratory in 2005.

The idea was to explore the commercial possibilities of superconducting linear accelerators. Among other projects, the company worked on an anti-missile laser weapon for the US Navy and massively powerful X-rays before pivoting to medical isotope production in the mid-2010s.

At the time, the US government was interested in creating a domestic supply of the radioactive isotopes used for nuclear imaging, in part because getting those isotopes from other countries meant shipping highly enriched uranium overseas.

Niowave got $15 million from the federal government in 2019 for the production of molybdenum 99, which is used for medical imaging, and another $13 million last year.

But making money on molybdenum 99 alone is difficult because other countries subsidize its production, said Niowave founder Terry Grimm.

“But whenever you split a uranium atom in half, it makes moly 99 and about 20 other valuable isotopes,” he said.

Those other isotopes, many of them useful as cancer therapies, will be where the profit is. Just this spring, Niowave began commercial production of yttrium 90, which is used in the treatment of liver cancer.

Grimm said their years of work with uranium helped them convince the federal government they’d be able to work safely with another highly radioactive element, radium, to produce actinium-225.

The vast majority of isotopes used for cancer therapy emit beta particles, which can kill cancer cells but often damage the cells around them.

“If you can get those alpha particles to the cancer cells, they have the capability of doing more damage but in a more confined region,” said Justin Wilson, an associate professor of chemistry and chemical biology at Cornell University who studies how to deliver radioactive ions to cancer cells. “Which, in theory could prevent hitting healthy cells that maybe aren’t part of the small metastatic lesion.”

Eric Burak, the chief technical officer at Fusion Pharmaceuticals, said the company is working on three drugs that use actinium-225, one of which is already in clinical trials.

But, he added, it’s “one of the rarest elements on the entire planet,” and, with more companies interested in its therapeutic potential “everyone is scrambling for actinium supply.”

Fusion is essentially investing $5 million to help Niowave ramp up actinium-225 production in exchange for a guaranteed share of what the company eventually produces.

On Thursday afternoon, a cluster of workers were preparing to move a radium target to the concrete bunker-like room that houses Niowave’s superconducting linear accelerator, preparation .

Radium is extremely radioactive and “part of the process of bringing the target and putting it down into the tunnel for radiation is making sure it is sealed up,” said Kristin Shannon, a radiochemist.

Medical isotope production has changed the company. It’s gone from 54 employees to more than 100 over the past 16 months.

Within two to three years, Zamiara said, “we’re going to be at 200 people and climbing from there.”

“We’re going to be developing additional isotopes that keep feeding into this,” he said.