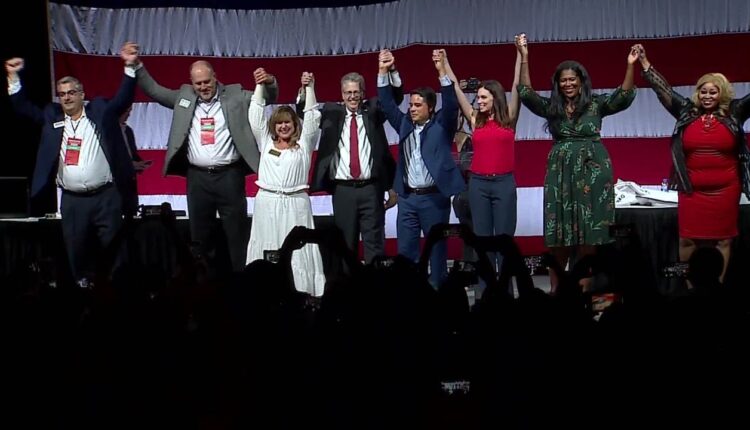 LANSING, Mich. (WOOD) — The Republican nomination convention has wrapped up in Lansing. It was the final step to get the GOP ballot confirmed.

This weekend in Lansing, Republicans finally put the finishing touches on what has been a chaotic primary and conventions season.

Saturday’s convention started out with a four-hour delay while those in charge were trying to figure out which set of delegates they would seat from Macomb County.

Republican State Party Chairman Ron Weiser received some jeers during the delay, but the convention seemed to get on track when they started dealing with nominations for lieutenant governor and affirmations of the endorsed candidates from an earlier convention.

Tudor Dixon and Shane Hernandez have been approved as GOP candidates for Governor and Lieutenant Governor in Michigan. (Aug 27, 2022)

Republican gubernatorial candidate Tudor Dixon joined Shane Hernandez, her pick for lieutenant governor, on stage as they prepared for the vote. At that point, neither spoke, but rather tried to convince the delegates to approve her selected running mate.

After the first ballot vote, Hernandez was approved. Then, the convention was, for all intents and purposes, over. The general election was underway.

In an unusual move after the convention was wrapping up, there were several Republicans on stage, including Dixon and Hernandez, but none of them spoke. They just ended the convention and moved on to a rally the state capital.

Democrats re-nominated all of their candidates last week.

With the election about ten weeks away, polls showed the Republican gubernatorial candidate trailing Governor Gretchen Whitmer by 11 points.