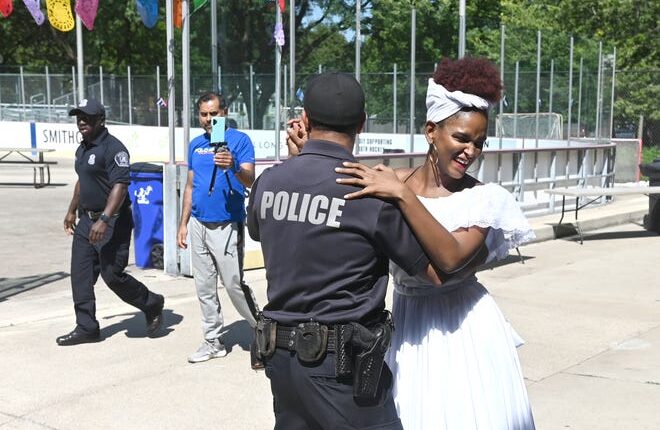 Rumba in the Park, a celebration of Latin culture and dance, is the latest in a string of efforts by the Detroit Police Department to improve community relations. It was hosted by the Second and Fourth Precinct’s neighborhood police officers.

This summer, Detroit has endured five mass shootings and seen increased violence against law enforcement, including the tragic shooting of Officer Loren Courts of the second precinct.

Officer David Vazquez, a neighborhood police officer with the Second Precinct, said Courts’ death weighs heavily on him and all officers in the city and he hopes events like this will help mitigate gun violence.

“Lately in the city of Detroit, we’ve had instances were some children end up getting hurt due to unnecessary guns around the house … and all gun violence is a little overboard and extreme,” Vazquez said. “I think the opportunity to actually be one on one and engage physically with an officer in a positive way through dancing, you know, that’s different.”

Gun safety locks were given out at the event and Fourth Precinct Sgt. Manny Gutierrez said that Detroit Police Chief James White is pushing officers to be more involved in the communities they police. He thinks events like Saturdays are also in response to the unfortunate increase in violence this summer.

“We’re trying to reach out in many different facets, so this is one of them,” he said, “What better way to bring people together than music and food?”

Fourth precinct Commander John Serda said these community events are something that they do as police officers and are not in response to any particular instances of gun violence.

“Anything that helps us when we are having violence is a good thing,” Serda said. “This is a community with a lot of Hispanic families and some of them come from places where they fear the police. We don’t want them to fear the police, we’re here to help.”

Victor and Carmen Guterrez live in the neighborhood around Clark Park and took their three young children to the event.

“(It’s) the first time I’ve seen a lot of Hispanic guys speaking our language being police,” Guterrez said. “I feel good because if there’s any trouble in the neighborhood you can trust them because they speak the same language.”

Francisco Jimenez was born and raised in Southwest Detroit and said he hadn’t known the police did events like Rumba in the Park until now.

“There are not many events that go on in my actual community, but this might be a way to get to know more people in your neighborhood,” the 22 year old said. “Some people have a weird idea of, you know, police officers. But they’re just humans too, they’re just doing their job.”

Susana Jackiewicz grew up in Detroit and now lives in Warren. She heard about the event from her daughter, who works at Fort Wayne in Detroit, and came for the salsa dancing.

“I think that it does create goodwill and maybe help reframe some of the negative things that we hear in the news all the time about the police department,” Jackiewicz said. “Music and dancing is universal, I think everybody can connect.”

Agriculture Discussion board: Plan ahead for harvest season | Business