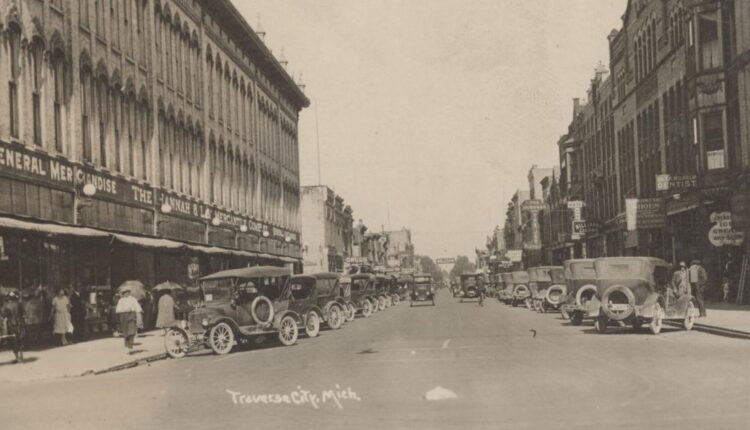 Back to school shopping — 100 years ago | Lifestyles

TRAVERSE CITY — Most families in northern Michigan are finishing up their back-to-school shopping. But what if it were the 1920s instead of the 2020s? Without computers or Walmart, where would local families shop for such things?

For families who preferred “street” shopping, 1920s Traverse City boasted a thriving downtown. It was more like the fictional Bedford Falls (from the classic movie, “It’s a Wonderful Life”) than the tourist haven it is today. On Front Street, or nearby, sat bustling drug stores, dry-goods stores, movie houses, meat markets, gas stations, and hardware stores. Of particular import to school shoppers were the “five and dime” and clothing stores.

Long-established local businesses vied with recently arrived national chains to draw shoppers in from the crowded sidewalks. The Hannah and Lay Mercantile Company was the oldest local establishment with roots going back to the 1850s. Its 1920s location, on the northeast corner of Front and Union Streets, had opened in 1883.

In the mid-1850s the business had operated as the company store for Hannah and Lay Lumber. Housed in a rather small, white clapboard building, it sat near what are today’s volleyball courts. It was eventually joined by three other buildings, all facing the incoming waves of West Grand Traverse Bay. For years this quartet was the town’s only shopping choice.

But Perry Hannah, one of Hannah and Lay’s founders, believed that competition was good. So he backed the establishment of numerous area businesses. For example, in 1873 he assisted two former employees, James Milliken and Frank Hamilton, in opening Hamilton, Milliken & Company.

Hamilton-Milliken’s started out in a just-vacated building on the south side of East Front between Cass and Park Streets. In 1889 the thriving enterprise moved into a brick building on the southeast corner of Front and Cass Streets. Although the building’s façade has been significantly altered it still stands, today hosting Espresso Bay and various offices.

For more than a century Milliken’s delighted tens of thousands of customers. And while of course items for purchase were its major draw, one feature was particularly dear to customers’ hearts. This was the second floor tea shop situated on an open mezzanine from where diners could observe the bustle below. Milliken’s marketing department seems to have known this, as is shown in the text of an August 1928 advertisement.

It proclaimed: “Balcony Tea Room — — — Free. When hunting for your treasure, be sure to look into our Balcony Tea Room. If you hold the right number, posted on the entrance door, it will entitle you to four 50-cent luncheons, or a group of four at one time.”

In spite of such temptations, there were shoppers who preferred the comfort of their own home to trudging along downtown sidewalks. Such citizens could sink deep into their armchairs and page through a mail-order catalogue. Benjamin Franklin printed the first such publication in 1774, offering scientific and technical pamphlets. But of far more import to Traverse City families with school-age children was the introduction of department store catalogs such as Montgomery Ward’s in 1872, and Sears’ in 1896.

There were several reasons why catalog sales had experienced great growth in the mid- to late-19th century. The middle class was growing, the national railway system expanding, and the US Postal Service was offering critical new services. In 1864, during the Civil War, a postal money order system was developed so that funds could be safely sent to and from US soldiers. This system was also a boon to the mail-order business, which now had a safe way to get paid. That same year the railway mail system was developed, whereby special railway cars were created that essentially were working post offices on rails.

By the 1920s further competition to local businesses came from the spread of national chains into smaller urban centers like Traverse City. While chains had long had multiple branches in large cities, two developments made the early-twentieth century move into smaller markets profitable: The exponential growth of automobile ownership and the spread of credit cards.

In 1919 there were 7.5 million vehicles in the United States. By 1929 this number more than tripled to 26 million. Rather suddenly, multitudes of rural residents could easily jump into their cars and make a quick trip into town to shop. And the 1920s were a prosperous decade, so such trips became quite common.

And if, in spite of such prosperity, a shopper was short on cash, he or she could benefit from another ’20s’ trend: the spread of the credit card. The decade saw many financial regulations loosened, including the amount of interest that could be charged. This allowed businesses to charge enough interest on money owed that they could finally make a profit selling on credit.

Chain stores arrived in Traverse City as early as 1914 when Woolworth’s “five and dime” came to town, finding a home at 118 E. Front Street. There the store stayed thru the 1920s, and that original location now hosts Brilliant Books. Eventually Woolworth’s shifted to more spacious quarters at 152 E. Front, where it continued offering inexpensive downtown shopping into the late 1980s. Cherry Republic graces that location today.

JC Penney’s arrived in 1926, taking up residence at 243 E. Front Street. Its inaugural, September 2nd Record Eagle ad alerted shoppers: “Buy School Needs Now! Quality school supplies and all apparel at our famous savings. School girls and boys from coast to coast are sensibly, attractively, and economically outfitted in our nation-wide organization of stores! Clothing of particular appeal to discerning mothers as well as every schoolroom need awaits you at our store – now!”

Penny’s served downtown shoppers until it moved into the then-new Grand Traverse Mall in 1992. Its former space was quickly occupied by Horizon Books, which moved and expanded from a smaller location on the south side of Front Street.

Montgomery Ward’s arrived in Traverse City in 1928. In a bit of irony, that national chain moved into space recently vacated by the area’s oldest local business, the Hannah Lay Mercantile. Of course, eventually Ward’s would also close, with the city’s center slowly turning into the upscale, hospitality-oriented destination it is today.

Prospect Colt Keith is making up for lost time in AFL

One man in custody after shooting in South Lansing