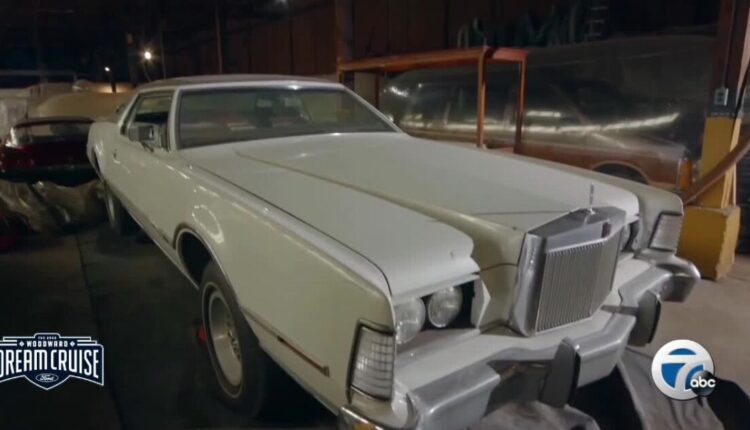 DETROIT (WXYZ) — Automotive innovation and the city of Detroit are pronunciated. 7 Action News had the unique opportunity to get a sneak peek of Detroit’s own car collection featuring rare vehicles from the past 125 years.

The collection, bubble wrapped and discreetly housed in a warehouse in Southwest Detroit, features 70 vehicles cared for by the Detroit Historical Society. Carefully protected by bubble wrap, each vehicle holds a unique story about Detroit’s automotive history.

“It’s really need to have this example that’s not only tied to an instrumental figure in kind of the Detroit auto landscape, but also it’s a great snapshot car again, of just what was on the road at the time,” said Dimick.

The collection features many unique vehicles, including concepts.

“It’s a 1963 Mustang two concept car,” Dimick said about one of the most unique vehicles in the city’s collection. “Ford rolled out the original Mustang experimental sports car, which is on display at the Henry Ford Museum. They borrowed some elements from the concept car, borrowed some from the production car and roll this out and showed it around to kind of manage people’s expectations of what they’d actually be able to buy when it came time to buy a mustang.

Sitting next to the Mustang concept is an orphan brand car.

“That’s a 1935 Stout Scarab. And Bill Stout was an aircraft engineer by trade, and he actually developed the Ford Tri Motor Airplane. Later in his life he started developing these experimental cars and really took aircraft designers’ eye to the automobile. And, so this car is designed really from the passenger perspective,” Dimick said about Bill Stout’s use of aviation design elements in automotive design.

“He said in his autobiography that when they were touring this car around, they drove from Detroit to LA with a glass of water on their dashboard and never still spilled the drop because the suspension was so good. There was only 35 made in 1935 and there’s only a handful of them left.

Next to the Scarab sits another rare vehicle from the 1930’s.

“It’s a 38 Packard. This 1938 hit is really the peak of Packard styling and gets all that great art deco influence that was so big in the 1930s, especially on the front end with the big headlights and all the chrome on the grille,” said Dimick.

Another area of ​​the warehouse houses vehicles that have been mass produced in what Dimick says is the Detroit style.

“Then on the complete opposite end of that is kind of more everyday stuff. Like we have a 1984 Dodge Caravan, for example, we have a 89 Ford Taurus. They’re all built in what we call the Detroit style of manufacturing. So, they’re mass produced and mass marketed cars that were available to a wide array of people.

Cars in the collection range from the turn of the 20th century to 1992 and rotate through the Detroit Historical Museum.

“It’s really broad and wide ranging, but I think that’s the strength of it,” Dimick said about the city’s expansive car collection.

To preserve the vehicles, the Detroit Historical Museum relies on some pretty interesting technology – bubble wrap.

“There’s a little tiny computer fan on the back of them. Basically, that pull in air from the outside and circulate air around inside the bubble to keep it inflated. But that also does is it keeps airflow moving around the vehicle. So, in the summer you worry about high humidity and kind of stagnant air that can cause mold growth. But also, you know, just keeps the dust off if, you know, dust happens no matter where they’re stored, kind of. So, it just, again, adds that extra layer of protection,” Dimick said about the use of bubble wrap and fans to protect the collection.

The collection, Dimick said, is crucial for the preservation of Detroit’s automotive history.

“It’s the signature industry for the 20th century. It’s really instrumental to the Detroit story. And we’re lucky to have such a great collection, to be able to demonstrate that history,” said Dimick.

While the city of Detroit’s car collection is not open to the public, the Detroit Historical Society is working to digitize the collection to give everyone access to these iconic and rare vehicles.