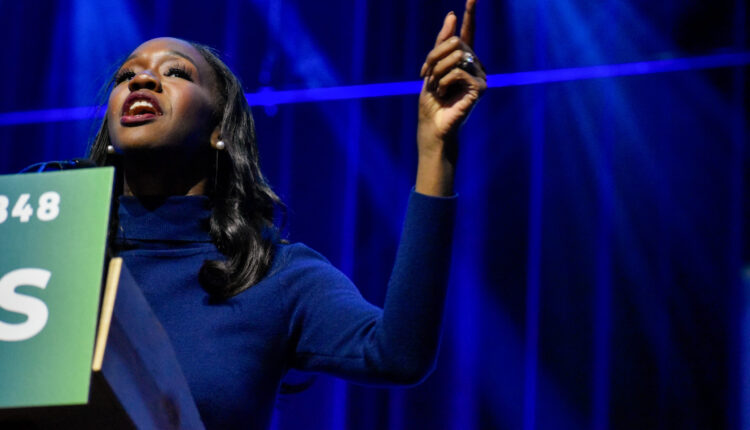 Bolden will be the first Black woman to serve on the high court and is Whitmer’s first appointment to the state’s Supreme Court. Michigan Supreme Court justices are nominated by state political parties, and justices nominated by Democrats currently hold a 4-3 majority.

Whitmer said Bolden will “bring a unique perspective to our high court as a Black woman—and as a new, working mom—that has too long been left out.”

“I will ensure equal access to justice, apply the law without fear or favor, and treat all who come before our state’s highest court with dignity and respect,” Bolden said, giving credit to black female judges “who blazed the path I seek to follow” — Judges Shelia Johnson, Debra Nance, Deborah Thomas, Cynthia Stephens and Denise Langford Morris.

“I hope that my voice on the Court will inspire future generations to pursue their dreams. I am humbled by this honor, and I am ready to get to work on behalf of all Michiganders,” Bolden said.

Bolden’s first term in the House started in January 2019 and she was reelected to a second term in 2020. She serves as the assistant Democratic Leader, a member of the House Judiciary and Insurance Committees, co-chair of the Legislative Attorney’s Caucus and chair of the House Democratic Caucus Diversity, Equity and Inclusion Committee. Prior to serving in the House, Bolden was a civil litigation attorney in Detroit.

“The composition of our courts should reflect the population its rulings impact. I commend the Governor for selecting Kyra Bolden to serve on our state’s highest court,” Attorney General Dana Nessel said in a statement. “I know Representative Bolden to be a sincere, caring and thoughtful person who will always take into consideration the substantial impact of each and every one of her opinions. She will serve the state with integrity and humility and will do so honorably.”

In September, McCormack notified Whitmer that she plans to retire from the bench before the end of the year. McCormack joined the Supreme Court in 2013 and has served as chief justice since January 2019. Her first term as chief justice was when Republicans had a 4-3 majority, so it was an unusual move for a Democratic-nominated justice to be tapped for the role. McCormack was reelected in 2020 and the court flipped to a 4-3 Democratic-nominated majority.

In February, McCormack will take on the role of president and CEO of the New York-based American Arbitration Association-International Centre for Dispute Resolution, a nonprofit that provides dispute resolution services to domestic and international clients. “The state is gaining a smart, savvy and hardworking public servant as its newest justice,” McCormack said during a press event Tuesday before leaving the newcomer with words of wisdom.

“Justice Harris Bolden, you are joining a great institution and you’re going to have wonderful colleagues to work with. The responsibility you’re about to assume is not always going to be easy, but it’s always going to be vital to our system of constitutional democracy,” McCormack said.

Once appointed, Bolden will serve a partial term expiring at noon on Jan. 1, 2025. If she wishes to complete the remainder of McCormack’s term, which expires on Jan. 1, 2029, Bolden will be required to run for reelection in 2024.

Justice Elizabeth Clement, who was appointed to the court by former Republican Gov. Rick Snyder, was unanimously chosen by the slate of Supreme Court justices as the court’s next chief justice for the remainder of the year.

Despite being nominated by Republicans, Clement has joined with Democratic-nominated justices in several cases, including a recent ruling from the court to ban discrimination on the basis of sexual orientation.