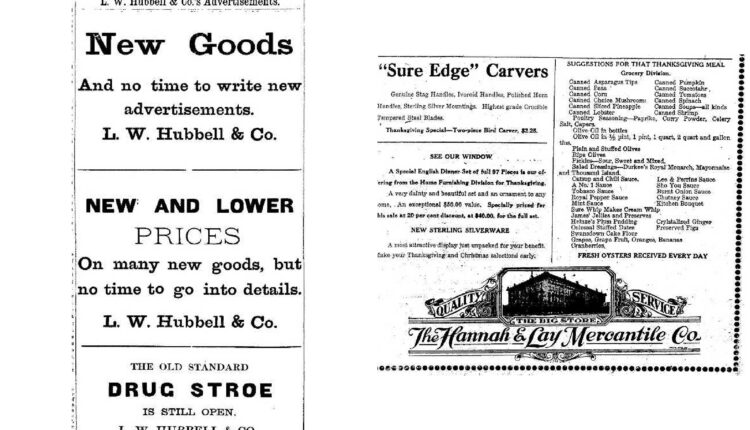 Turkeys, Tonics, And Tales Of Thanksgivings Past In Traverse City

Thanksgiving is here, and the holiday comes with not just family celebrations but soon afer, plenty of sales and opportunities to spend. The federal celebration of Thanksgiving had its official start in 1864 following a proclamation by Abraham Lincoln, but as a day of celebration, it’s been part of Traverse City history since well before that.

Traverse City’s earliest documented reference to Thanksgiving comes from December 1858, the first year of the Grand Traverse Herald’s existence. A brief report passes along a mention of six Thanksgiving Day sermons from a Detroit newspaper, but the first substantial mention comes from a few days later. It shouldn’t surprise you to find that despite taking place over 160 years ago, the focus was even then on food, specifically poultry.

On Christmas Eve of that year, the Herald reported on…a very heavy chicken. “Mr. Crawford Leith, of the Whitewater Settlement, hath a chicken a little over six months old, which weighs twelve pounds! His friends think that if he escapes the Thanksgiving and Christmas danger that lurk in his path for a year or to come, he will amount to a ‘certain sum.’”

Naturally, the chicken itself is not just anthropomorphized, but a poet, and a political one at that. It’s quoted as “saying:”

Should I chance to escape being knocked into PI(E)
For two years to come, and my voice gets strong,
A note for old “Chapman” I’ll modestly try,
While Republican victories burden my song.

Who is Chapman? That reference is lost to the ages. Newspapers in the 1800s were weird. Thanksgiving menus and recipes were unfortunately uncommon, though the Herald does offer explicit instructions (including butchery) from November 15th, 1888 on how to prepare your turkey, gravy and stuffing, the latter of which is nearly unchanged to today.

“The best and most wholesome stuffing is made by crumbling the soft inside of a loaf of stale bread, moistening the cribs slightly with melted butter, and season with salt, pepper and thyme,” reports the Herald, which also does suggest stuffing the bird itself, which is no longer recommended. “The steam from the fowl will furnish sufficient mixture, and the stuffing will be light and delicate instead of soggy, rank and heavy.”

If grocery advertisements are any indication of what ended up on the kitchen table for the holiday, Hannah & Lay’s “Big Store” had a number of suggestions that focused mainly on a still-novel way to package food: the tin can. Canned peas, mushrooms, pumpkin, spinach and tomatoes were all available, as was canned pineapple, asparagus tips, shrimp and even lobster. Oysters were a big deal around the holidays, and as such Hannah & Lay advertised fresh shipments arriving daily.

A variety of olives and pickles were available, as were a dozen bottled sauces including A No. 1 Sauce, Tabasco, Sho You Sauce (apparently an antiquated name for soy or shoyu sauce) and the especially delectable Burnt Onion Sauce. Your meal would finish with grapes, oranges, bananas, plum pudding. stuffed dates and preserved figs. Hopefully all that was served on a shiny new 97-piece English Dinner Set, available for just $40.00.

And what about the sales? Shopping and Thanksgiving have always been intertwined, and even though there was no Cyber ​​Monday or Black Friday in 1800s-era northern Michigan, attempts to separate shoppers from their cash around the holidays are timeless. For example: In November 1874, the Herald ran an ad for the LW Hubbell & Co. drug store that almost reads like reverse psychology.

“NEW GOODS And no time to write new advertisements. NEW AND LOWER PRICES On many new goods, but no time to go into details.” Clearly Hubble was too busy to even proofread the copy, because the ad finishes by stating that “The Old Standard DRUG STROE is still open.” Do you think that this is just a bad transcription by a clerk over a phone line, the telephone was still two years away from being patented, let alone brought to northern Michigan.

Shoppers in late November 1900 had the opportunity to spend part of their Thanksgiving Day not hunting for Doorbuster pricing, but treating their dyspepsia. dr Ottman of Grand Rapids took out an extensive ad in the Morning Record advertising his monthly stop at the Whiting Hotel, promising that “HE CURES AFTER OTHERS FAIL.” No insurance or deductible was needed, either: “No money required of responsible parties to commence treatment.”

This was certainly of particular interest to those suffering from “the awful effects of early vice and the numerous evils that follow in its train,” “female weakness” and (specifically to young and middle age men) “all organices destroying both mind and body with their dreadful ills.” Married men “or those entering on that happy life” who were aware of “physical debility” were “quickly assisted.” Cases and correspondence confidential, of course.

A half-off discount was a half-off discount no matter if it’s an online sale today or a clothing sale 100 years ago. In 1922, a store promised “a Humdinger of a sale” on socks, suites, overcoats, sweaters, Mackinaws, shirts, all at half price, and all you had to do was shop on Saturday, November 25th at…The Irishman And The Jew, an actual shop in early 20th century Traverse City.