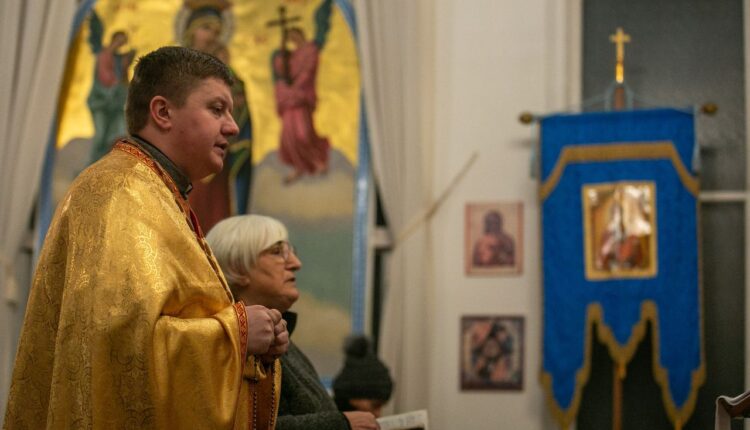 GRAND RAPIDS, MI – Hours after Russia invaded Ukraine, parishioners of a Ukrainian church in Grand Rapids gathered to pray, cry and voice support for those under attack.

“We can always pray,” the parish administrator said Thursday night inside the church on Spring Avenue on the city’s Northeast Side.

The Rev. Roman Fedchyk preached those words, repeatedly, to a group of about 20 people Thursday night who gathered to support their family and friends in Ukraine.

Russia launched a wide-ranging attack on Ukraine on Thursday, hitting cities and bases with airstrikes or shelling, as civilians piled into trains and cars to flee, the Associated Press reported.

Together, parishioners came together inside the St. Michael the Archangel Ukrainian Greek Catholic Church in Grand Rapids and prayed for their loved ones during a special prayer service.

“We ask each of you to pray and pray our families in Ukraine are looked over,” Fedchyk said. “We can never pray too much.”

Following the nearly hourlong prayer, those in the church shared hugs with one another as some continued to wipe away tears.

Ukraine’s government said Russian tanks and troops rolled across the border in a “full-scale war” that could rewrite the geopolitical order and whose fallout already reverberated around the world, the AP reported.

Kent County asks community how it should spend share of $127.6 million in federal…