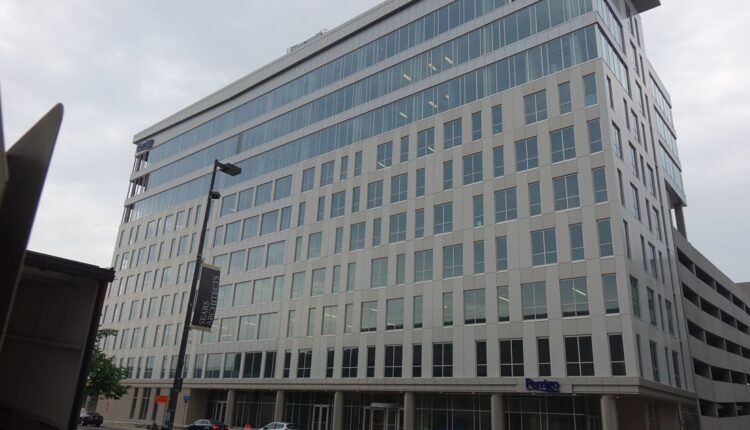 Perrigo, the private label over-the-counter pharmaceutical company, has always had a presence in West Michigan. It was founded in Allegan and has operations in Holland. But the opening of the company’s new North American headquarters in the Grand Rapids Innovation Park adds another key piece to the city’s burgeoning health sciences sector.

Perrigo is opening the headquarters in July in part to strategically enhance its ability to attract diverse and highly skilled professionals and help it alleviate future space constraints at its Allegan campus.

The company also sees the benefit of joining a host of other health care-focused companies and research facilities in Grand Rapids. It picked the Grand Rapids location over Chicago and Miami, according to Brent Case, vice president of business attraction for The Right Place, Greater Grand Rapids’ economic development organization.

“Perrigo demonstrates that corporate America has a place in the Medical Mile,” he said, noting the larger concentration of hospitals, medical offices and research facilities that stretch more than a mile up Michigan Street. “Perrigo can work with other infrastructure there like the Van Andel Institute and Spectrum Health and tap into the talent that is available in West Michigan. Perrigo is a global company with strong roots in Michigan.”

West Michigan is now home to 60,000 health science jobs, 428 health science companies and 83 medical device manufacturers, according to The Right Place, a concentration that has had an enormous impact on the community. Doctorate level jobs translate to six-figure salaries, said Eric Icard, senior director of business development at The Right Place, and since 1996 when the Medical Mile was established, hundreds, if not thousands, of those jobs have been created.

The concentration of research, education and a talented labor pool is attractive for an employer like Perrigo that needs highly skilled, scientifically trained employees.

“We believe this expansion into Grand Rapids will accommodate our growth needs, enhance our ability to attract highly skilled professionals, and enriches Perrigo’s growing reputation as a leading consumer self-care company,” said Ron Janish, executive vice president of global operations and supply chain. “The new location in the MSU Grand Rapids Innovation Park supports our self-care vision by bringing cross functional teams and leaders in self-care research and innovation to one campus to better serve consumers and customers.”

The MSU Grand Rapids Innovation Park is a public-private partnership that is bringing together academic medicine, healthcare delivery and others interested in transforming health. The location places Perrigo in the company of academic, research and clinical experts found within the medical park network. It is designed as a collaborative health innovation hub for biomedical research, bioengineering and health technology.

While it is too soon to specify what may materialize from the partnership, the collaboration is focusing on three main areas: research and clinical outcomes; retail and pharmacy experiences; and technology, product innovation and sustainable packaging.

Michigan State University College of Human Medicine published a study in 2021 outlining the future economic impact of the university’s Grand Rapids presence. The buildings include the Secchia Center, the MSU Grand Rapids Research Center, the Doug Meijer Medical Innovation Building and the Perrigo North American headquarters. According to the study, the annual direct economic activity related to the four buildings is estimated to be $203 million with an annual economic impact of $339 million, annual support of 2,017 jobs and an increase in annual earnings of $142 million.

The Perrigo headquarters was built in the heart of downtown Grand Rapids, one of the few West Michigan corporate headquarters to be located in the city’s business district. The headquarters is about 63,000 square feet and will be home to about 150 Perrigo employees. The new headquarters does not replace or alter its operations in Allegan or Holland, according to the company. Perrigo will occupy the top three floors of the building with the rest open to tenants.

The available space won’t last long, said Icard, who specializes in the healthcare sector for The Right Place. The Doug Meijer Medical Innovation Building, which sits next to the new Perrigo headquarters, has already attracted health science tenants including BAMF Health, which built the most advanced cyclotron-equipped radiopharmacy in the world there. BAMF Health claims its equipment can be used to quickly identify cancer and begin treatment, shortening a 40-minute scan to one minute.

Having advanced medical research surrounding Perrigo’s new headquarters is important and more development could be on the way to further boost health sciences in Grand Rapids. Michigan State owns property on the north side of US 131, a short walk to the rest of its campus. Though no plans for that site have been announced, Icard said they bought the property for a reason.

“We believe our partnership with MSU and others in the Medical Mile has the potential to yield meaningful innovation that helps our retail partners and consumers make informed health and wellness decisions that are best for themselves and their families,” said Janish.