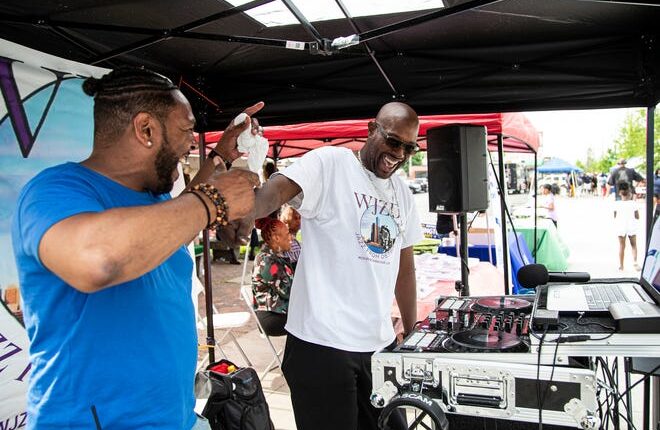 Raging morning thunderstorms didn’t stop revelers from enjoying an all-day festival along the Livernois Avenue of Fashion on Saturday.

“I walked all the way down this strip,” said Barbara Littles, a 1973 graduate of Northwestern. “I shopped, I heard music. It’s so nice to see all these people. This is the way Livernois should look every day.”

The production included choir and orchestra performances with current DPSCD students, according to Tyrone Winfrey, executive director for community affairs for the district. Rochelle Riley, director of Arts and Culture for the city, said the future was on stage Thursday evening, and they were shining bright.

“The Office of Arts, Culture and Entrepreneurship was so proud to partner on this,” said the former Free Press columnist. “It literally makes very clear how much talent we have, not just with our professionals who make up one of the greatest creative workforces in the country, but the young people who are getting ready to come in and fill those shoes.

The alumni events continued on Friday with alumni going to visit their former schools. Mumford High held a special ceremony to honor three of the city’s pastors for their dedication to the students’ success at their alma mater: Bishop Edgar Vann of Second Ebenezer Church, Pastor Marvin Winans of Perfecting Church and Bishop Charles Ellis of Greater Grace Temple.

A meet and greet at the Detroit Athletic Club for some of the alumni that happened on Friday evening.

Saturday morning, They Say Restaurant owner and Kettering alum Terry Payne opened his doors to a smaller group of alumni and staff for an invitation-only brunch ahead of the afternoon’s festivities. Addressing the attendees, district chief public affairs officer Desirae Tolbert spoke of correcting the narrative about the school system.

“I get to work with so many phenomenal people,” she said. “And I use that phrase, ‘get to,’ very specifically. I was talking with some people who were speaking about the district and they said (students) ‘have to’ go there, as if it’s a bad place. I said, ‘No — they get to go here.’

“What a time to represent these great public schools.”

“It started,” she said, “with just really wanting to bring alumni from everywhere back home and saying, ‘There’s a lot of great things happening in the district now.’ We even have an idea for an alumni hall of fame. There are great people that have come through the district, and we’re ready to create a space and place to celebrate this.

At Saturday afternoon’s outdoor event along Livernois, a DJ blared 1990s R&B that could be heard for blocks, and high school marching bands traveled up and down the sidewalks in a flurry of horns and drums. The bands were symbolic: Proceeds from the day’s festivities benefited DPSCD’s Office of Fine and Performing Arts.

“We want to let Detroit know that we put the arts back into every one of our schools,” said district arts and music director Anthony Davis. “Our superintendent is serious about supporting the arts and making sure that all of our students have access to them.”

“At Mumford, we are revered for arts. The district has been behind every DPS school with this. Historically, we didn’t have the arts for a long time. Having them back has helped our enrollment, and it’s been a catalyst for all that we’re doing here at DPSCD. It’s a beautiful thing to have the students express themselves, and seeing the community involved.”

Or, tickets are still available for alumni who want to attend Sunday’s awards gala at Huntington Place, formerly known as Cobo Center.

Sunday’s festivities at Huntington Place in downtown Detroit begin at 4 pm with a red carpet layout, a VIP reception following at 5 pm and the awards and gala at 6 pm To purchase tickets, go to https://www.detroitk12.org/comehometickets

Jasmine Barmore was born and raised in the city of Detroit. She covers the city’s neighborhoods and communities using her passion as her drive to give the voiceless a voice. You can reach her at [email protected] or by sending her a message on Instagram or Twitter at @bjasminmare.

Mental health counseling can be highly efficient. But finding the right therapist is key.