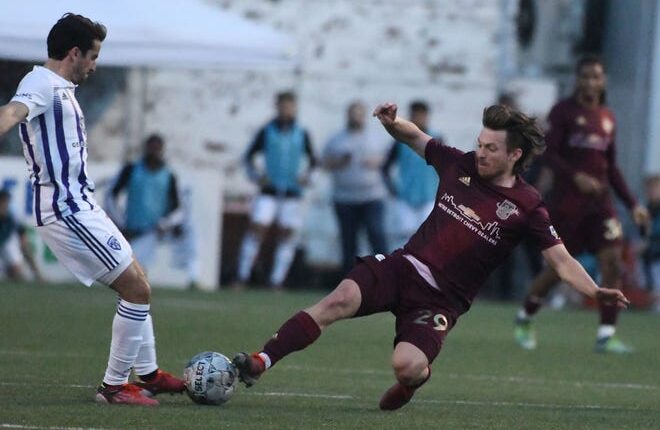 Hamtramck — There were some moments Detroit City FC maybe let its guard down a little bit. And sure, head coach Trevor James never likes giving up goals off a set piece.

But when the dust settled on DCFC’s 3-1 victory over Atlanta United II on Saturday night at Keyworth Stadium, nobody can be upset about three points, especially when it comes with the added prize of tying Louisville City for first place in USL Championship’s Eastern Conference .

Heading into a bye week, it’s a position that not even James himself saw coming in the club’s first USLC season.

“The boys stepped up, and they’ve done fantastic.”

Botello Faz tied Hoppenot for the team lead in league goals during the 13th minute. DCFC defender Stephen Carroll bombed the ball downfield to a wide-open Deklan Wynne, who came in with Botello Faz 2-on-0 and passed it over for a quick strike and 1-0 lead, Botello Faz’s fourth of the season.

Despite a reversal of information from Atlanta this go-around, James said that his team was anticipating being able to exploit space.

“Obviously we were fortunate enough to do that and got a great pass from Stevie in the first goal, and we did it a few more times,” James said.

Botello Faz said that he’s recently been practicing his one and two touch a lot this season, which has led to most of his chances so far this season.

“That’s a game situation, that’s what I’m going to get in the game. I try to make it as game realistic as I can, and just be ready for the game, basically,” Botello Faz said.

An Atlanta mistake in the 27th minute gave DCFC a prime opportunity inside the box. Atlanta goalkeeper Vicente Reyes picked up a ball that was played back to him by a teammate, giving DCFC a free kick from about 12 yards out. The attempt was stopped.

But moments later, DCFC would add to its lead. Hoppenot reclaimed his team lead in USLC goals (five), stealing the ball from Reyes on another pass back from his teammate and putting it in the net for a 2-0 lead in the 32nd minute.

Atlanta picked up some momentum before the half, scoring in the 44th minute. Robbie Mertz sent a cross to the box on a set piece that was perfectly placed for a header from Orji Nelson Chukwuma, cutting DCFC’s lead in half.

Detroit City quickly regained a strangehold on the match to open the second half. Rodriguez received a through ball from Hoppenot that rolled through a pair of defenders and slammed it home for his second of the season.

After a rigorous stretch of five matches in 14 days, DCFC will have next weekend off and won’t return to action until June 4 at Pittsburgh Riverhounds SC.

And that’s extra important, because DCFC (24 points) jumped Pittsburgh (22), which has a game in hand on Le Rouge, in the standings on Saturday night. Memphis (22), though, can jump everybody by collecting three points in Sunday’s match against Loudoun United.

“Honestly, it’s been pretty tough the last few days, and a lot of guys are feeling stuff,” Wynne said. “(The break) gives time for players who are injured to come back and strengthen the squad, and then also having a few days to freshen everyone up and get ready for the game in Pittsburgh.”

Nolan Bianchi is a freelance writer.