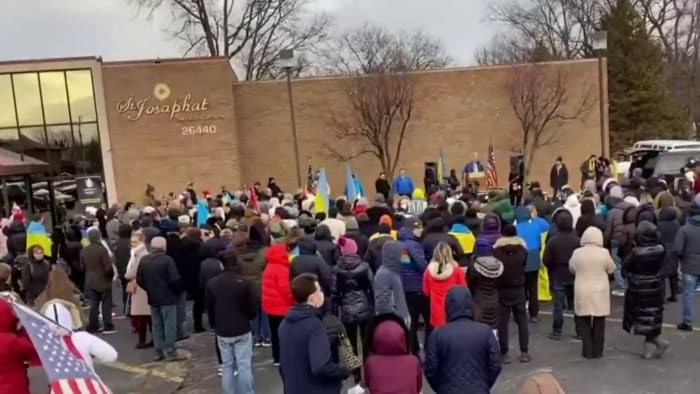 WARREN, Mich. – Metro Detroit has a sizable Ukrainian-American population, and many of them rallied in Warren Thursday (Feb. 24) night.

They are asking for used medical supplies that are in good shape that can be sent to help the Ukrainian Army and donations to relief organizations doing work in Ukraine.

“Let’s say a prayer,” said a man speaking at the rally.

Prayers for peace and pleas for help for Ukraine as several hundred gathered at the St. Josaphat Ukrainian Catholic Church.

“We are all very concerned about family over there, but we know that they’re going to stand up, defend their country, defend their freedom,” said Alex Tolksdorf.

Watching the invasion unfold is hard on Metro Detroit’s Ukrainian American community; some grateful their grandparents who emigrated to the US aren’t alive to see it.

How long Ukraine can hold out against the Russian Army is an unknown. But local Ukrainian Americans are donating to aid non-profits and scouring their homes for gently used medical equipment to send to the Ukrainian military.