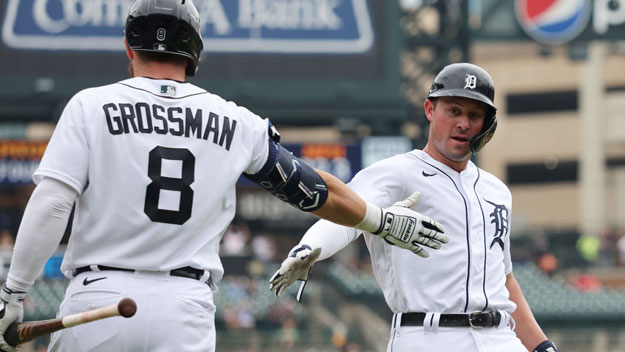 Miguel Cabrera took another step toward earning a 12th All-Star bid, and his first since 2016, on the merits of his play in 2022.

DETROIT, MICHIGAN – JULY 06: Miguel Cabrera #24 of the Detroit Tigers hits a two run double in the fifth inning in front of Sandy Leon #4 of the Cleveland Guardians at Comerica Park on July 06, 2022 in Detroit, Michigan. (Photo by Gregory Shamus/Getty Images)

Cabrera hit a two-out, two-run single in the fifth inning and had a third RBI on a sacrifice fly to help the Detroit Tigers beat the Cleveland Guardians 8-2 on Wednesday, completing a four-game sweep against their AL Central rivals for the first time since 2013.

Cabrera, who early this season became the seventh player with 3,000 hits and 500 home runs, moved past Dave Winfield into a tie for 17th with Rafael Palmeiro on baseball’s all-time list with 1,835 RBIs.

The 39-year-old from Venezuela might be given a spot in the Midsummer Classic on July 19 in Los Angeles by the commissioner’s office based on the career he has had.

Cabrera could be on the AL roster, though, simply for his play this season. He leads the Tigers with a .308 batting average, which ranks among league leaders, and 31 RBIs as perhaps the most productive player on a disappointing team.

“If the commissioner wants to add him as a legend, he’s dead on,” manager AJ Hinch said. “But when you look around at the guys on our team, he’s certainly a viable candidate on his own.” DETROIT, MI – JULY 1: Manager AJ Hinch #14 of the Detroit Tigers signals from the dugout during the second inning of a game against the Kansas City Royals at Comerica Park on July 1, 2022, in Detroit, Michigan. (Photo by Duane Burleson/Getty Images)

In Tuesday’s 11-4 win over Cleveland, Cabrera had three hits in a game for the eighth time this year.

“Nothing he does surprises me,” said Detroit outfielder Robbie Grossman, who hit an RBI triple in the seventh and scored on Cabrera’s fly. “There’s a reason he will be one of the greatest hitters to ever play.”

Even though there was a base open to give to Cabrera with runners on second and third in the pivotal fifth inning, manager Terry Francona said he didn’t want to pitch around him.

“We were trying to get him out,” Francona said. Cleveland’s Shane Bieber (4-4) gave up five runs on seven hits and three walks while striking out six over 5 2/3 innings.

“I was hoping to be that energy source for us and unfortunately just couldn’t do it,” Bieber said. “That’s frustrating. I expect more from myself.”

Detroit is 7-2 against the Guardians this year and is set up to win the season series against them for the first time since 2015.

Franmil Reyes hit a solo shot off Pineda in the second to put Cleveland up 1-0, but the Tigers went ahead in the bottom half of the frame when Kody Clemens and Tucker Barnhart hit RBI singles.

The Guardians took the lead again in the fifth on Steven Kwan’s double. But in the bottom of the fifth, Javier Baez hit a game-tying single and Cabrera’s two-run single gave Detroit a 5-2 lead.

The Tigers haven’t heard from lefty pitcher Eduardo Rodriguez since he went on the restricted list nearly a month ago, Detroit general manager Al Avila said. ST PETERSBURG, FLORIDA – MAY 18: Eduardo Rodriguez #59 of the Detroit Tigers reacts after walking in a run in the first inning against the Tampa Bay Rays at Tropicana Field on May 18, 2022 in St Petersburg, Florida. (Photo by Julio Aguilar/Getty Images)

Avila declined to say if the Tigers are attempting to void the $77 million, five-year contract that Rodriguez signed in November. Rodriguez is 1-3 with a 4.38 ERA in eight starts this season.

Guardians: 2B Andres Gimenez was not in the lineup. “We took him out (Tuesday) night because he got hit in the knee pretty hard,” Francona said. “We were hoping that would help. He came in, and he’s pretty sore.”

Tiger’s: RHP Wily Peralta went on the 15-day injured list with a strained left hamstring strain. RHP Will Vest was recalled from Triple-A Toledo and pitched the ninth.

Guardians: After a day off, Cleveland heads to Kansas City for a series that starts Friday. RHP Aaron Civale (2-5, 7.04 ERA) goes for the Guardians. The Royals haven’t announced their starters.

© 2022 Associated Press. All rights reserved. This material may not be published, broadcast, rewritten, or redistributed.