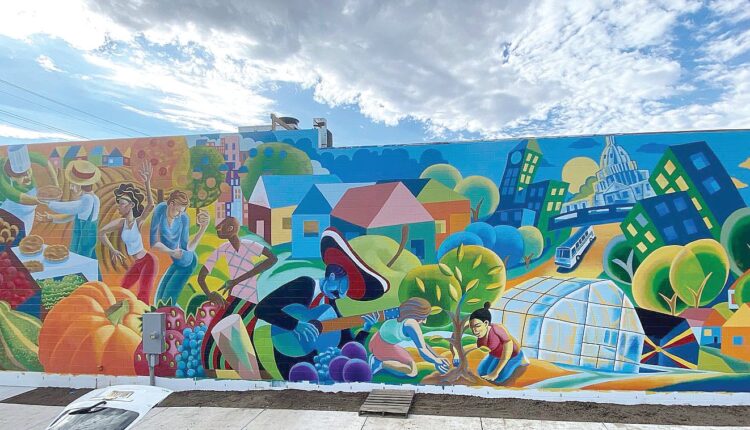 Several of the many intertwined facets of Lansing’s art and culture scene managed to come back on a grand scale in 2021. While the worsening pandemic news in December proves that we still have a frustratingly long way to go before the pandemic can be declared over. Those who were vaccinated, took appropriate precautions if necessary and were otherwise not immunocompromised, had a lot to enjoy in the past year when they wanted out of the house.

The first months of the year before the vaccine was launched were calm. Almost every major New Year celebration was streamed live, and during much of spring every major event was completely virtual in one way or another. The pandemic devastated many local facilities. The iconic pinball Pete’s almost found himself on the chopping block. A viral fundraiser in January lit the neon lights in East Lansing’s only video arcade. The Avenue Café, which had to keep its doors closed until March, also received a widespread local crowdfunding campaign following the damage caused by the pandemic.

A great art highlight earlier this year was the Broad Museum’s excellent exhibition of the drawings by Lansing-born automotive artist Michael Burton, the first African American to design cars for Ford. “Interstates of Mind” ran until August and was a touching homage to an important local personality. The Broad also launched Seeds of Resistance, reminiscent of the fascinating Beal Seed Viability Experiment that first began in 1879.

Another exhibition at MSU in March was “Beyond the Black Panther: Visions of Afrofuturism in American Comics”. The exhibition was a deep dive into the world of black comics and its overarching themes and influence on popular culture.

In March, Lansing writer and horror dog Jenn Carpenter opened a new headquarters for her wide variety of true crime and paranormal works, including novels, tours and an entire festival. The Screamatorium caused a sensation in REO Town, bringing people from all over the state and the entire Midwest to the historic Lansing neighborhood.

The biggest story in April was the confusion surrounding Mac’s Bar. Originally, the expectation was that the closed bar and music hangout would return as a full-fledged sports bar without the same tendency to host live music. After much public anger on social media in response to the news, owner Chuck Mannino made it clear that Mac’s Bar is actually becoming a pizzeria that would take up the neighboring building for additional space and still host concerts, albeit in a smaller capacity. Mac’s Bar has been draped in white paint ever since, but its original pitch black coat still protrudes and serves as a subtle visual reminder of what the legendary Lansing music venue once was.

Another music venue that will no longer exist in 2021 is the Loft. It closed for the long term in 2020 and its Facebook page posted an announcement that it will be closed for good, but that post was quickly deleted causing some confusion about the future of the loft. In July, we were introduced to Studio 414, which will use the former loft building for events such as wedding receptions and stand-up comedy nights. Live music is hot, but not nearly as big as the loft at its height.

When the introduction of the vaccine began, concerts returned in the summer. After more than a year without gigs, the Avenue Café hosted some kind of emotional homecoming for Lansing’s local indie music scene with a noisy July concert featuring performances by Jeremy Porter, Hunky Newcomers and Foxgrave. This was followed by a series of weekly concerts with local bands from all genres that held steady for the rest of the year. The summer also marked the return of Lansing JazzFest, Ten Pound Fiddle, Common Ground, weekly shows at Urban Beat and concerts from the MSU College of Music. Finally returning to a venue with friends and being able to experience live music live was a long overdue moment of ecstatic joy for countless people across Lansing.

The summer also marked the return of the Arts Night Out in Old Town. The place where people would gather to enjoy the hard work of local artisans and enjoy food from mom and pop restaurants on a warm summer night was in such stark contrast to 2020 that one might have wondered if they were accidentally slipped into another dimension.

The Lansing Symphony Orchestra announced in February that it would cancel the remainder of the 2021 season, and it was uncertain whether there would be a single LSO show in total this year. Classical music lovers were disappointed, but in October the symphony returned to play in front of more than 1,000 people.

While the Capital City Film Festival has not yet been able to host its due 10th anniversary celebration with its largest edition, as originally planned in 2020, it was still able to be present in 2021. Director Dominic Cochran helped organize several weekend trips. in shows that were a perfect throwback to one of the coolest old school ways of enjoying a movie. In the meantime, the East Lansing Film Festival has resumed its in-person screenings with a number of films screened in Studio C! in Okemos.

There were some big announcements at the end of the year. One was the transition of the operations of LCC’s 89.7 radio station from college to the Michigan radio network. A coalition of local arts professionals failed to convince LCC to convert the frequency to a community run station, and now if you tune in 89.7 you will hear exactly what you would hear on 91.7. Community-produced content is expected to be released in January. Another shock was the news that the Lansing Art Gallery was moving to Knapp’s Center.

The year has given us a satisfying taste of what we missed in 2020, which makes it all the more important that the pandemic not be ignored. Should the situation deteriorate further, a return to the shutdowns of last year may not be out of hand.

Man sentenced to 30 years for drug trafficking in Lansing area