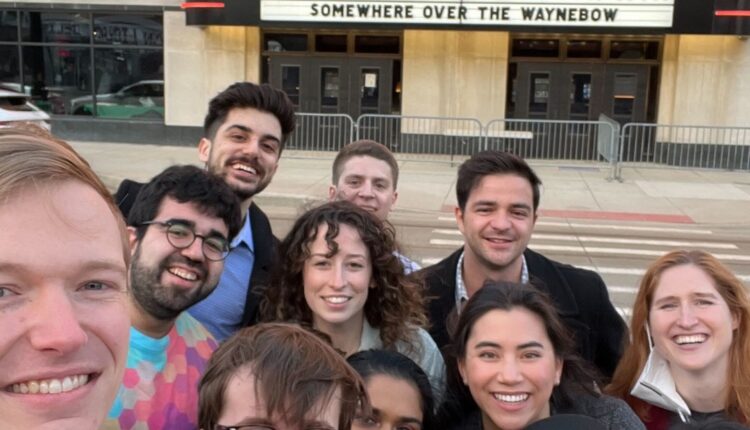 Members of The Aesculapians executive board gather outside the theater.

The Aesculapians Honor Society is a student-run organization committed to impacting Detroit’s community through service. Its mission is to mitigate health care disparities in the community through service, and by extension, to improve the health of the city. Every year, students from each class are nominated to join the group based on their involvement in myriad student groups and initiatives for the betterment of both Detroit and the School of Medicine.

The group partners annually with a local organization committed to Detroit’s population, referred to as the Community Partner of the Year. Brilliant Detroit is a 501c3 nonprofit organization working to supply families with children from infancy to 8 years old with what they need to be school ready, healthy and stable by providing programming and support in Brilliant Detroit homes in high-need neighborhoods. In addition to Lampoon proceeds, The Aesculapians raised another $1,013.30 for Brilliant Detroit through its annual fundraising initiatives.

“Despite a plethora of COVID-restrictions, we as a group were able to volunteer with them on a number of in-person and remote initiatives. Critically, we worked throughout the year to raise funds for a bulk donation at the end of our yearlong interaction,” said Aesculapians former Co-President Marissa Ray, MD, who graduated with the Class of 2022 in June.

For more information about Brilliant Detroit and its mission visit www.brilliantdetroit.org. 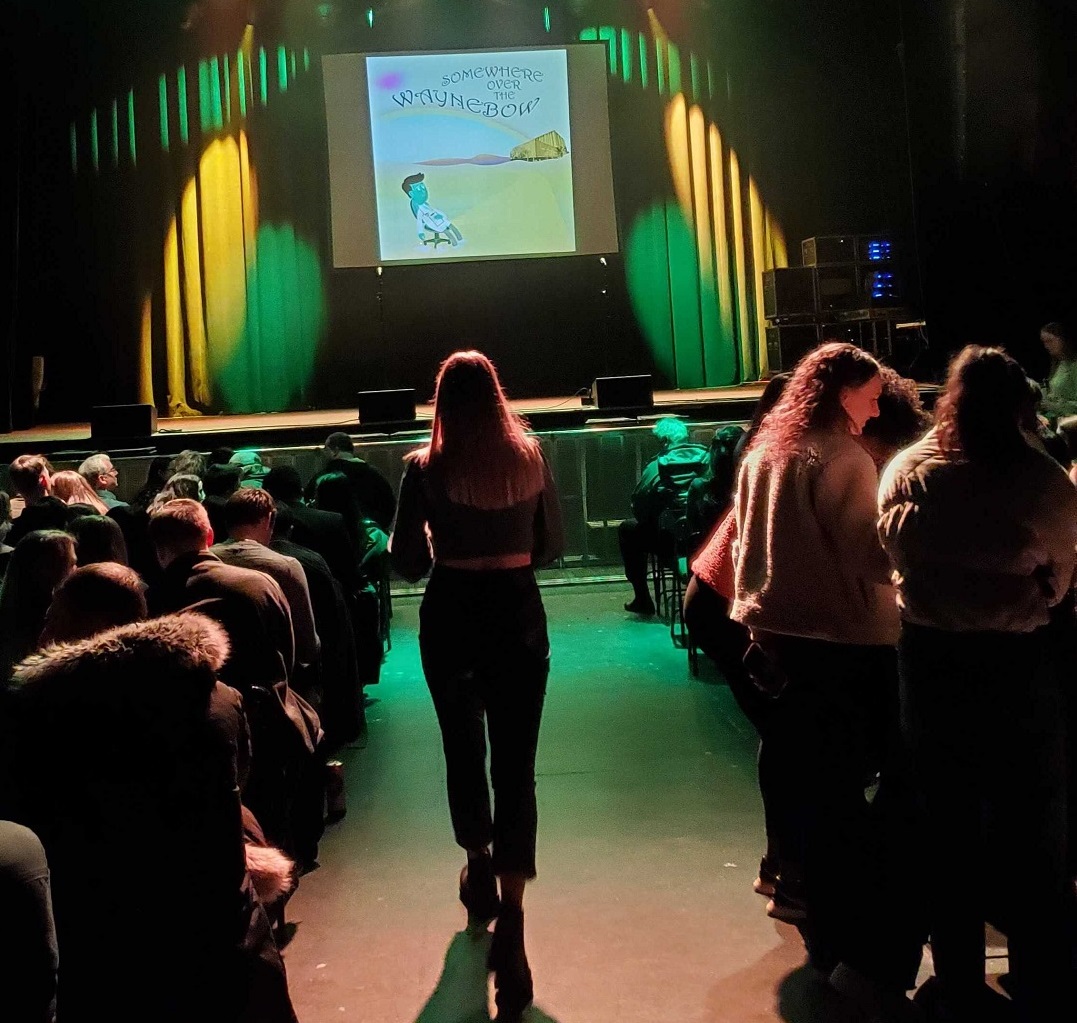 This year’s theme, “Somewhere Over the Waynebow,” took inspiration from the MGM musical “The Wizard of Oz.”

Lampoon, held virtually in 2020 and 2021, returned March 12 to the Majestic Theater in Detroit. Lampoon events have been hosted by School of Medicine students for decades, and serve as a fun outlet for medical students to write and produce skits and parodies to playfully mock the trials and tribulations experienced during the different stages of medical school.

(The YouTube playlist for Lampoon 2022 skits is now available here.)

Each class year produces independent content based on their own experiences, while The Aesculapians’ Lampoon Coordinators – this year they were Michael Moentmann, MD, Class of 2022; Kenan Alhayek, Class of 2023; and MD-Ph.D. student Rafael Ramos – produce their own content and collate the show around a theme.

“Lampoon is an awesome way to meet other medical students and to work creatively with your friends to make really fun skits, and it’s great that it’s all for charity,” said Chelsea Yu, creative co-leader of the Class of 2025’s content and newly inducted member of the Aesculapians, “I’m already so excited for next year’s Lampoon.”

Despite difficulties this past academic year, including issues surrounding the COVID-19 Omicron variant spike in early 2022, the 2021-2022 Aesculapians leadership and membership strove to bring back the in-person tradition, especially since Lampoon 2019 had been the last in-person show before the pandemic.

“With support from the School of Medicine and our amazing event coordinators out of the Majestic Theater in midtown Detroit, we made the event a reality,” said former Aesculapians Co-President Daniel Harris, MD, Class of 2022. 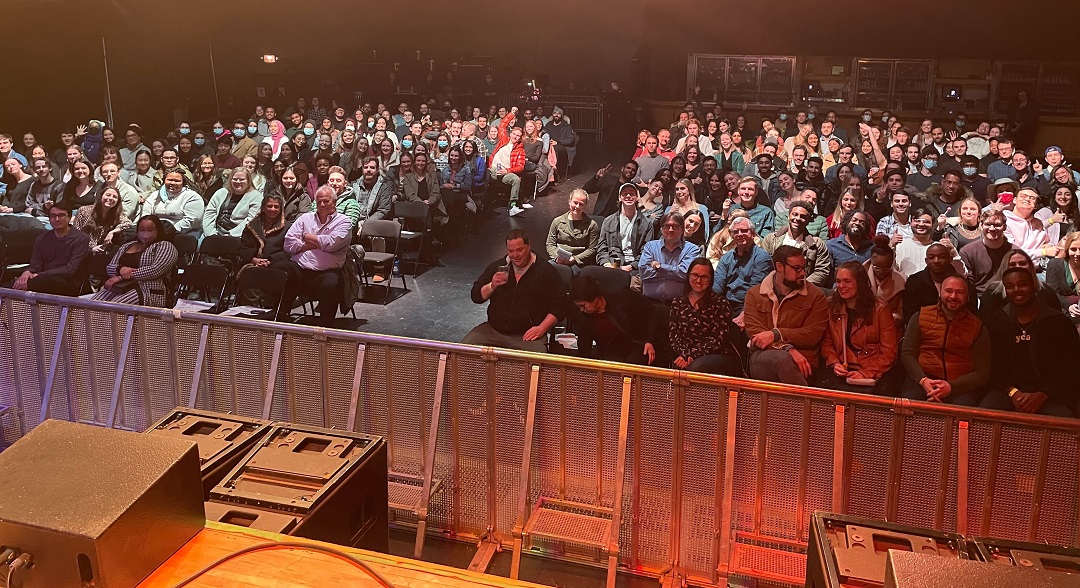 The return to a live format was presented at the Majestic Theater in Detroit.

Video skits such as “Scenes from the Wizard of Oz” with a medical school flare, a musical parody titled “I’ll Make a Doc Outta You” parodying the titular song from Disney’s “Mulan,” and a “The Bachelor”-style selection show called “The Matchelor” were enjoyed by more than 280 attendees.

The show opened with a speech from Cindy Eggleton, co-founder and chief executive officer of Brilliant Detroit, who elaborated on her group’s mission and graciously expressed her thanks on the students’ volunteering and fundraising efforts.

The show also included the presentation of the Lamp Award to Associate Professor of Pathology Barbara Bosch, Ph.D., and the Staff Award to Undergraduate Medical Education Learning Spaces Coordinator Scott Nelsen, who students voted as fundamentally critical for their survival in different aspects of their medical school experience.

“Despite the work and a few sleepless nights, it was very special to be able to help run and enjoy this event with members of my starting medical school class before they graduate,” Ramos said. “As to MD Ph.D. in Engineering, I am a little separated from life in the School of Medicine, and I’m happy that this is my continued bridge into the goings-on of this school. I’m very glad we were able to revive the tradition, and I hope Lampoon 2023 is uniquely fantastic.”