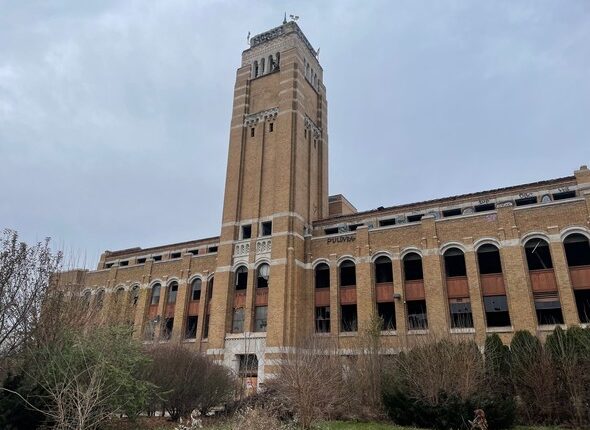 Developers have secured $32.6 million in tax incentives to raze buildings and clean up contamination at the former American Motors Company headquarters, but some westside neighbors want more formal commitments to protect their health before shovels hit the dirt.

The City Council on Tuesday unanimously approved NorthPoint Development’s request for a 34-year financing deal, which uses a portion of the taxes collected from the property to reimburse NorthPoint for cleaning up the 50-acre site at 14260 Plymouth Road. The Missouri-based developer plans to spend $72 million to clear out the site and build a 794,000-square-foot warehouse or light industrial space.

The investment comes up short of the $75 million threshold that triggers Detroit’s community benefits ordinance. The relatively new, but potentially powerful voter-approved tool, requires developers of certain projects to meet with neighborhood representatives to agree on benefits for residents in the surrounding area, including job and housing commitments or environmental protections. Failure to meet those agreements could result in city benefits being clawed back.

NorthPoint’s investment is considered a “Tier 2 Project” under the ordinance, meaning most commitments are voluntary, the developer isn’t required to hold a minimum amount of public meetings, and there’s no appointment of a Neighborhood Advisory Council to negotiate resident benefits or a liaison to monitor the process.

Robbie Nguyen, a project manager and engineer with NorthPoint, said the project site plan was adjusted based on discussions with potential tenants and neighboring residents.

Nguyen said NorthPoint will request downgrading the industrial zoning designation at the site and has committed to preventing truck traffic on Plymouth Road and improving the nearby Mallett Playground. The developer also will establish a minority industrial developer mentorship program, reserve 300 bus tickets for new hires, and set up a monument to honor the history of the site. The project is expected to create 350 permanent jobs and 100 temporary construction jobs.

Nguyen said to address concerns about truck traffic and pollution from exhaust fumes, tenants of the site will be instructed to direct trucks off Interstate 96 to Fullerton Avenue and Schaefer Highway, to avoid local streets.

An ornamental fence and tree wall also will be installed to block the view of a truck parking area, Nguyen said.

“We’ve endeavored to be as transparent as possible,” Tim Conder, vice president of development at NorthPoint, said during a public hearing last week.

Conder said residents insisted on demolishing the decaying structures in community meetings. Demolition is projected to begin in October and finish by March 2024.

The AMC developers and city officials have touted their efforts to engage residents and build local support for the project, but some Detroiters said it doesn’t go far enough. More than 100 people signed a petition asking NorthPoint to sign a voluntary community benefits agreement that guarantees protections for quality of life in the neighborhood.

Detroiters who attended Tuesday’s council meeting and a public hearing last week said they want to see the AMC headquarters demolished, but also want promises from the developer put down in writing.

District 7 resident Wendy Caldwell spoke Tuesday on behalf of the petitioners, saying they want free air filters and air quality monitoring systems for each area household, funds set aside for home repairs and small business development and an assessment of potential conflicts of interest between the developer and the consultants who put together an environmental impact analysis.

Caldwell last week credited the developer for attempting to address resident concerns, but argued that the commitments thus far are “not sufficient nor equitable when compared to the money that Detroiters are paying for this development.”

Others, including Detroit resident and preservation advocate Francis Grunow said demolition of the former administrative buildings represents a lost opportunity.

“The structure is an asset and should be integrated into the proposal to further improve it and invest in it, not be thrown away and wasted,” he said during last week’s public hearing. “It is structurally sound, a fine example of our art deco architecture, a touchstone to Detroit’s industrial heritage and that of District 7.”

Halima Cassells, a Detroit artist, objected to uses that would bring truck traffic in the vicinity of neighborhoods.

“People don’t want to live next to entities that may, in fact, create jobs, but give them cancer or any other type of environmentally-induced chronic illness due to corporate or government malfeasance,” Cassells said. “Black and Brown people are four times more likely to die from environmental pollution than white people. Ask the folks that live near the Ambassador Bridge if truck emissions are noxious or not. The people in the impact area need ongoing air quality monitoring in the neighborhood and perhaps soil testing to ensure their safety. That’s why we need the CBO.”

District 7 Council Member Fred Durhal III said he’s impressed with the level of engagement between NorthPoint and neighboring Detroiters. Durhal said he takes the environmental concerns of this project to heart, but believes this “is going to be huge” for his district.

The councilman noted last week that the district hasn’t seen many projects in decades.

“This building has sat for 20-30 years. Folks drive around by this every single day to the point where you look at it and folks think this is just normal to see. That the decay is not normal,” he said. “We have the ability now to bring life to that area and have a great partner, create jobs and stabilize our neighborhoods in that area.”

The taxable value of the property will increase from $14,256 to $14.6 million by 2025, according to city brownfield documents. The new taxable value could increase up to $19.4 million when the financing deal ends in 2054.

The developers also plan to seek a 12-year tax abatement that would provide a temporary tax break.

The 1.5 million-square-foot complex is one of the largest blighted industrial sites in the city. It originally opened in 1927 for the Kelvinator Corporation, a refrigerator manufacturer, and changed hands several times. Detroit obtained the property through a land swap in 2018 and late last year Mayor Mike Duggan announced a deal to sell it to NorthPoint for $5.9 million.

City officials said 30 different contaminants were identified across the site, including arsenic, lead, mercury, vinyl chloride and a host of other dangerous pollutants. Leaks from underground storage tanks were reported 18 times since 1989. The brownfield plan approved Tuesday requires clean up and disposal of contaminated soils and groundwater, and for developers to prevent pollutants from migrating from the site.

Brian Ellison, a principal of Intersection Consulting Group, who spoke on behalf of NorthPoint during last Thursday’s public hearing, said downgrading the zoning is a significant change.

The land is zoned M4 “intensive industrial district.” Detroit zoning classifications state M4 districts allow for uses that are ​​”usually objectionable and, therefore, the district is rarely, if ever, located adjacent to residential districts.”

Developers instead are advocating for the area to be rezoned as M2 “restricted industrial district,” designed for a wide range of uses “which can function with a minimum of undesirable effects.”

Kenyetta Hairston-Bridges, executive vice president of economic development and investment services for the Detroit Economic Growth Corp. said the city’s Department of Neighborhoods convened three engagement meetings with residents and that there was overwhelming support.

All clean up activities eligible for reimbursement must start within 18 months of the plan’s approval and finish within three years.

NorthPoint requested $32.7 million in tax increment financing, but city projections anticipate that only $21.8 million will be available to reimburse the developer for eligible activities costs.

authored by
First published at https%3A%2F%2Fwww.bridgedetroit.com%2Ftax-credits-okd-for-amc-redevelopment-but-detroiters-want-benefits-deal%2F