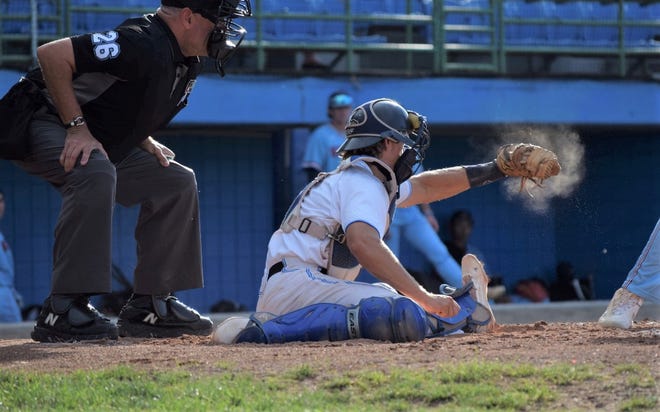 College baseball players come to Battle Creek for a summer of extra games beyond their regular season for two reasons — to get better and to get noticed.

Mission accomplished for a handful of Battle Jacks this summer as their play at MCCU Field at CO Brown Stadium has opened the eyes of some important people.

Three Battle Jacks — Billy Hancock, Patrick Mills and Adam Berghorst — were named to the rosters for the upcoming 2022 Major League Dreams Showcase, which will be hosted by La Crosse (Wisconsin) on Tuesday,

The annual showcase consists of games featuring the top players from the Northwoods League, as selected by a panel of Major League Baseball scouts. The players will participate in a day of workouts in front of scouts, followed by the doubleheader.

“Everyone is here to get better and hopefully get recognized and get a chance to keep playing baseball after college,” Hancock said. “Getting a chance to play in the showcase is a good opportunity. The scouts are the ones that invite you, so you figure they see something they like about you.

“Getting this chance gives me hope for the future and gives me some drive to keep doing what I am doing.”

Hancock is leading the team in hitting at .316, having played 43 games at catcher, with 26 RBIs and a slugging percentage of .405.

Mills was the team’s lone representative at the recent Northwoods League All-Star Game and is hitting .288 with 35 RBIs.

Berghorst missed the first part of the season due to injury and is a two-sport player at Michigan State University, also playing tight end for the football team. The 6-foot-7 pitcher has started three games and has a 2.74 ERA.

“Almost everybody here has a goal of playing professional baseball in some capacity,” Battle Jacks manager Caleb Lang said. “There is a lot of opportunity and if you perform and put up good numbers, you will get noticed.”

This year’s draft was 20 rounds and 93 former or current Northwoods League players selected. The highest Northwoods League alum picked in 2022 was Brooks Lee, a junior infielder from Cal Poly. Lee was picked in the 1st round by the Minnesota Twins with the 8th overall pick. Lee played for the Willmar Stingers in 2020.

Former Battle Creek Bombers player Javier Vaz, of Vanderbilt, was selected in the 15th round by Kansas City.

“The Northwoods League is a great opportunity for kids to get noticed, especially if they didn’t quite play as much at their school and didn’t get a lot of attention,” Lamb said. “When I was in Traverse City in 2019, we had four guys from that pitching rotation who were eventually drafted.

“I think there’s a handful of guys on our roster this year that have that potential. Pat Mills has had a great summer, that’s why he was an All-Star, and he’s getting noticed. There are others, like the guys going to the Showcase, who are also in that category and I fully expect would be on draft boards next year.”

For the Northwoods League’s 30th anniversary in 2023 the league announced that the Bismarck Larks and the Traverse City Pit Spitters will each host All-Star Games in 2023. This will be the first time that the League will hold two All-Star Games featuring players exclusively from each division.

The Traverse City Pit Spitters will also be hosting their first All-Star Game after winning championships in their first two seasons of play in 2019 and 2021.

The Battle Jacks are in the middle of their longest stay at MCCU Field this season. Battle Creek began in its homestand on Monday and will have games every night this week, reaching into Sunday. From there, the Battle Jacks will be on the road the entire following week, making room for the NABF World Series in Battle Creek.

Following the end of the Battle Creek Bombers era after last season, the new owners of the local Northwoods League franchise had a “Name The Team” contest — which resulted in the Battle Jacks.

But what if the team had gone in a different direction?

The Battle Jacks are hosting their “What If?” night on Saturday and will be the Battle Creek Donuts for one game. The donuts was one of the finalists from the contest.

The colorful Battle Creek Donuts uniforms will be auctioned off during the game and fans will take them home following the contest.

The Battle Jacks will be hosting a Youth Baseball Camp 10 am-noon on Saturday, presented by Hemmingsen Drugstore. Participants will spend the day learning from Battle Jacks players and all skill levels are welcome. Registration ended on Friday, but there are a limited number of spots still available.

The Ambulance Chased One Patient Into Collections