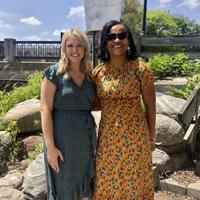 The debut of the Traverse Connect Community Mentoring program in 2022 was so successful that most of the nine mentees were still meeting with the 27 mentors from the initial cohort.

“They had that deep of a relationship,” Traverse Connect Director of Investor Engagement Brenda McClellan said. “It was very impactful for them.”

The 2023 program begins with a three-hour retreat on Feb. 1 and concludes with a workshop and celebration on June 21. Mentors and mentees have eight 90-minute meetings during the four months of the program.

The Community Mentoring program is open to both for- and nonprofit companies “in all stages of professional development,” according to a release.

More information and a program application is available at traverseconnect.com/communitymentoring or by sending an email to [email protected]

In the first 10 days the application was open for the 2023 program, McClellan reported there were already five registered with several others showing an interest.

On the application process, McClellan said both the mentors and mentees rank themselves on more than a dozen “core competencies.” Mentors with a strength in one area and paired with a mentee who ranks themselves weaker in the same area and vice versa, McClellan said.

“We found that to be highly successful in this year’s program,” she said.

Several of the mentors from the 2022 program are back for 2023, McClellan reported.

The slate of 2023 mentors for the Traverse Connect Community Mentoring program include:

Grinsteiner is a mentor after serving on the professional development committee at Traverse Connect.

Gallagher is back for a second go-round as a mentor. He would recommend others put in the effort as well.

“I learned a very valuable lesson once again through this program, which is that you get what you give,” Gallagher said in the release. “This was a great example of that.

“I highly recommend this program for anybody in the area who is looking to, in fact, get what they give and also anyone who’s looking to accelerate their development and their career. It’s been a great experience.”

Peter Laing, operations manager at Mawby Sparkling Wines, would also recommend the program. Laing was a mentee in 2022.

In the release announcing the 2023 program, Laing said he “definitely gained some insight, as well as the confidence, to move forward in some of the areas where I felt like I was struggling a little bit as a leader in our business,.”

During the kickoff, both the mentors and mentees gather for a group meeting before splitting off into the two groups. Each of the groups has a speaker and expectations for the program are discussed.

“We want them to get the most out of the program,” McClellan said of the kickoff strategy.