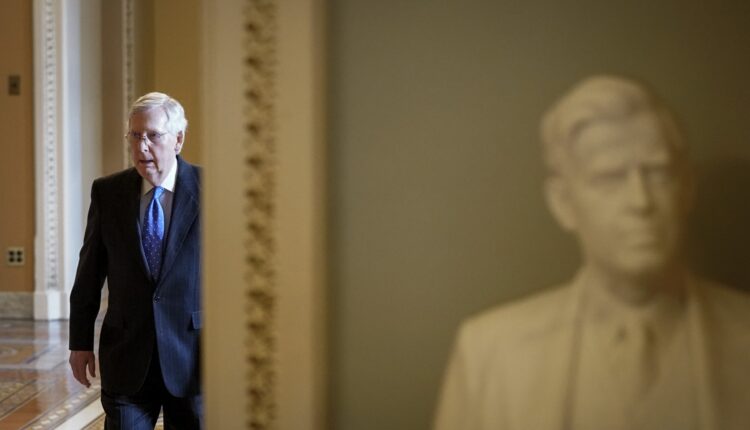 Republicans in Congress shy away from campaigning on national abortion platform ⋆

WASHINGTON — Republicans, hoping to flip control of Congress in the November elections, appear to have decided against campaigning on a unified abortion platform that would specify exactly what conservatives plan to do if given control of the U.S. House and Senate.

Yet Republicans in Congress have written dozens of proposals that, if passed, would restrict abortion nationwide. GOP lawmakers this session have introduced more than 153 abortion-related bills that party leaders could point to as evidence of what Republicans would try to pass on the national level if they trounce Democrats at the polls.

They include legislation that would define life as beginning at the moment of fertilization, prohibit insurance coverage for abortions, and make it a crime punishable to up to five years in prison for doctors who perform abortions after a heartbeat is detected, generally at about six weeks.

But so far, Republicans have opted against a cohesive national campaign strategy on abortion, following the decision by the U.S. Supreme Court in June to overturn the landmark 1973 Roe v. Wade case. Many Senate Republicans are brushing aside questions about whether they would take up a nationwide abortion bill, citing as a hurdle the Senate filibuster that means bills need 60 votes to advance.

Republican leaders are leaving it up to each House or Senate candidate to tout their own bills and views while the party wrestles with whether the matter should be left solely to state lawmakers or if Congress has a role to play.

“It’s one thing that we are debating within the conference,” Iowa Republican Sen. Joni Ernst said of a nationwide abortion bill. “But at the same time, most of us do believe that the Dobbs decision was the right decision, and it’s returning that authority to our state and local governments. That’s our system of federalism.”

Rep. Cathy McMorris Rodgers, a Washington Republican who has become one of her party’s leading voices on abortion, said during a brief interview the GOP won’t put forward a nationwide abortion policy ahead of the midterms.

“We’re not in a position to move anything and the U.S. Supreme Court really sent it back to the states,” she said.

But McMorris Rodgers didn’t rule out Republicans pushing nationwide legislation after the election if they regained control of Congress.

“Not before the election,” she said, later adding “Well, yeah,” when asked if Republicans would put forward legislation afterward if they won.

Back to the states

Some Republicans have repeatedly said their opinion of the ruling on abortion in Dobbs v. Jackson Women’s Health Organization is that it sent the issue back to the states. Others have said it’s a topic for Congress to debate as well.

The Supreme Court’s decision overturning the constitutional right to an abortion that stood for nearly 50 years said “the authority to regulate abortion is returned to the people and their elected representatives.”

House GOP Whip Steve Scalise, a Louisiana Republican, said during a press conference in June shortly after the ruling was released that the decision “finally allows states and Congress to” pass new abortion legislation.

But House GOP Leader Kevin McCarthy, of California, when asked what exactly Republicans would do on abortion, was vague, saying “we will continue to look wherever we can go to save as many lives as possible.”

McCarthy did mention a bill from Missouri Republican Rep. Ann Wagner, though he didn’t say exactly which of her bills he’d bring up.

Wagner is the primary sponsor of legislation that would require doctors to provide health care to “any infant born alive after an abortion” or attempted abortion. But she’s also sponsored several other bills related to abortion.

Congress passed a similar bill, from Ohio GOP Rep. Steve Chabot, two decades ago. The legislation, titled the Born-Alive Infants Protection Act of 2002, passed the House on a voice vote and the Senate by unanimous consent.

Florida GOP Sen. Rick Scott, chair of the National Republican Senatorial Committee, said he expects every candidate will decide how they want to talk about abortion. Fellow Floridian Sen. Marco Rubio, who is in a tight race against Democratic House Rep. Val Demings, said “Republicans will have different views about what restrictions and what the law should be.”

“There are issues that are relevant to it that we can have a debate on here, but we have a filibuster that would make it impossible to pass a bill into law,” Rubio said.

Louisiana Republican Sen. John Kennedy, who faces a relatively easy reelection campaign in the deeply red state, agreed with Rubio that any GOP abortion legislation is unlikely to move past the filibuster.

“There aren’t 60 votes to do anything on the floor of the United States Senate with respect to abortion, pro abortion, anti-abortion, just anything to do with abortion,” Kennedy said.

“What folks who feel strongly on both sides of the issues need to do now is go back to their states and, not put on a show, but put on the case,” he continued. “They’ve got to convince their state legislatures.”

Retiring Missouri Sen. Roy Blunt said the issue belongs at the state, not the federal level.

“I’ve always thought the best place to deal with this was at the state legislative level and that’s what I still think,” Blunt said.

Senate Minority Leader Mitch McConnell, a Kentucky Republican, has said it’s “possible” that a GOP-controlled Congress could pass a nationwide abortion ban, though he’s sought to downplay the likelihood.

McConnell said he would absolutely keep the chamber’s legislative filibuster in place, meaning the only way a nationwide abortion bill could get through is with a Republican super majority or some Democratic support.

“We don’t want to break the Senate and that’s breaking the Senate,” he said of removing the filibuster.

The vastly different views on abortion as well as party leaders’ approach to campaigning on the issue has led Democrats to turn the midterm elections into something of a referendum on abortion.

“This fall, Roe is on the ballot,” President Joe Biden said the day the Supreme Court released its decision overturning the 1973 Roe v. Wade ruling that established abortion as a constitutional right. “Personal freedoms are on the ballot. The right to privacy, liberty, equality, they’re all on the ballot.”

Biden added that this November, voters “must elect more senators and representatives who will codify a woman’s right to choose into federal law once again, elect more state leaders to protect this right at the local level.”

But the vast majority of Democrats have echoed Biden, telling voters that this November has become about more than who controls the U.S. House and Senate.

“This is the future that MAGA Republicans clamor for; where women and same-sex couples are branded as second-class citizens,” Senate Majority Leader Chuck Schumer said on the floor. “If they succeed, they’ll take our country down a dark path from which there may be no return.”

Democrats in Congress have voted on bills showing exactly how the party hopes to ensure patients throughout the country can terminate a pregnancy, or travel freely to states where the procedure remains legal.

They’ve also brought up bills to ensure the right to same-sex and interracial marriages as well as the right to decide if and how to use contraception.

This is the future that MAGA Republicans clamor for; where women and same-sex couples are branded as second-class citizens. If they succeed, they’ll take our country down a dark path from which there may be no return.

Republican leaders, for the moment, don’t plan to say exactly which bills they’d vote on if they regain control of Congress.

“They’re very nervous,” Virginia Democratic Sen. Tim Kaine told States Newsroom. “And their polling should tell them that, because we’re seeing this as dramatically affecting the polls in a number of our races.”

Kaine played down the idea that making the midterms something of a referendum on abortion access could be problematic if Republicans regain control of Congress and then say the results show American voters want a nationwide abortion law.

“Oh, they’re gonna do that anyway. Rock solid guarantee, no matter how the election goes,” Kaine said. “We’re very certain that’s coming and we’re trying to do all we can electorally and otherwise to head that off.”

While Kaine expects voters will pick representatives based on more than abortion, he does expect the Supreme Court’s decision will drive voter turnout for Democrats.

“And that’s why my Republican colleagues do not want to be talking about this or create any kind of a party plan that everybody’s supposed to go for,” he said.

Senate Majority Whip Dick Durbin, an Illinois Democrat, criticized Republicans for not being clear with voters about how they plan to address abortion if given control of Congress.

“The Republicans, if you’ll notice, have been surprisingly quiet, in my estimation, in reaction to Dobbs,” Durbin said. “I think they understand that these opinions may serve their base, but they don’t serve the party or the electorate at large.”

Maryland Democratic Sen. Chris Van Hollen said the abortion ruling is one of a number of critical issues that voters will focus on this year, though he added, “it’s not the only issue on the ballot.”

“I think the Dobbs decision is one of them, reproductive freedom is certainly a part of that. But it will also be a referendum on the kind of government you want, whether you want extremists like the MAGA crowd in the Congress,” Van Hollen said. “And it’s also going to be a debate on what we’re doing that’s within our power to reduce prices, like cutting the costs of prescription drugs.”

So far this Congress, Republicans have introduced 153 bills addressing abortion, with 94 in the House and 59 in the Senate.

Wagner’s bill has the most co-sponsors with 203 GOP backers.

Other legislation with broad Republican backing includes a bill from New Jersey Rep. Christopher Smith that would permanently prevent the federal government from spending money on abortions with an exception for rape, incest or the patient’s life. The legislation would also prohibit qualified health plans from including coverage for abortion, according to a summary.

West Virginia Rep. Alexander Mooney sponsored a bill that would define life as beginning at “the moment of fertilization, cloning, or other moment at which an individual comes into being.” The bill clarifies that “nothing in this Act shall be construed to authorize the prosecution of any woman for the death of her unborn child.”

And legislation from Pennsylvania Rep. Mike Kelly would make it a crime for health care providers to perform abortions after a heartbeat is detected, typically around six weeks. Doctors who perform the procedure would face up to five years in prison, a fine, or both if convicted.

The bill creates an exception for a patient whose life is endangered by a physical diagnosis or injury, but not a “psychological or emotional” one.