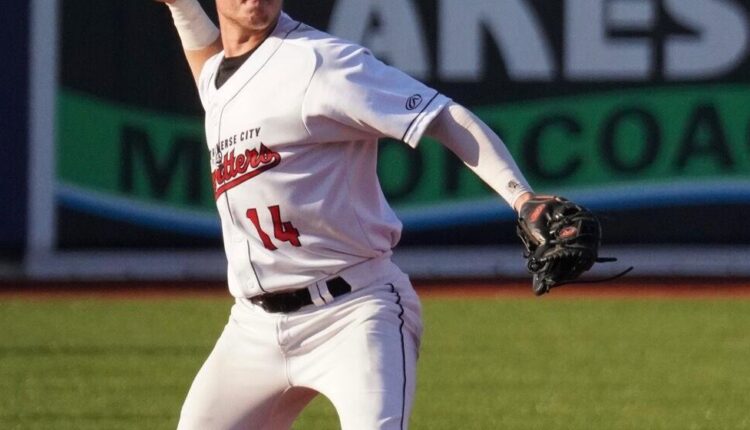 Glenn Miller had already played 30 to 35 baseball games this summer, wrapped up an All-Star performance in the Great Lakes League and was looking forward to giving his body a rest before heading back to college.

Miller was having a conversation with his mother, Donna, indicating he was ready for a break. An hour later, Miller got a call from the Traverse City Pit Spitters, saying they needed a guy to play infield for them for the rest of the season.

The Traverse City Pit Spitters are two-time defending Northwoods League Champions but failed in their bid for a three-peat when they lost to the Kalamazoo Growlers in the playoffs this month. According to the Traverse City Pit Spitters’ website, the Northwoods League is a developmental league for elite college baseball players. Three hundred players from the league have advanced to Major League Baseball in the 22-year history.

Glenn said growing up, maybe even before kindergarten, he was playing baseball and family members were teaching him skills. He grew up watching the Detroit Tigers and remembers thinking he could do that, play professionally.

While Miller and his family believed in his aspirations, it was hard to get noticed playing at a small, rural Class D high school like Pentwater. But Miller is quick to point out his love for his hometown and said he looked for ways to get noticed by college coaches.

Even with good high school stats — a .579 batting average, 45 RBIs, four home runs, 12 doubles, five triples and 21 stolen bases his senior year — he went to camps and played against kids from all over. It was about getting the exposure.

While playing for the West Michigan Rip Tide, a coach from Spring Arbor University took note. In 2021, Miller earned an honorable mention on the All-Crossroads League while playing for Spring Arbor. He had a .344 batting average with 67 hits, 35 RBIs and two home runs, a .439 on-base percentage and a .436 slugging percentage.

Miller played in Grand Park, Indiana, in the summer of 2021 with men who were playing Division 1 college baseball. Miller was holding his own.

“They are playing D-1, I should be playing DI college baseball,” he said.

He started looking for Division 1 colleges and ended up choosing Eastern Michigan University. Miller says there is a good culture at EMU, it is geographically close to home and he is on a baseball scholarship.

Miller is majoring in sports management with a minor in exercise science. He knows he will not be able to play baseball forever, but he wants to be around the game for a lifetime, maybe as a college coach or a scout for a professional team.

“Never stop working. Play more baseball than anyone else,” Miller said as advice to others. “Keep on going where you need to go to get better. Know that you’re not just playing against people in your league or town, but against people in the state and from all over.

“There are a ton of people with the same goals as you have; you are going to have to work them out,” he said. “You have to be willing to work and practice on your own. That is when you’re going to get to be your best, when no one else is watching.”

When Miller realized the weight room was his friend and he started to take nutrition seriously, his performance really started to improve.

Ironically, Miller’s first baseball game he attended was in Traverse City when the Frontier League’s Beach Bums called it home. His Aunt Charlotte took him to the game and he remembers loving it.

Miller finished the 2022 season with the Pit Spitters, playing infield and he says the ballpark in Traverse City is a great place for kids and the fans are awesome. Miller batted .375 in the playoffs, hitting a double with two RBIs, and a .500 slugging percentage.

The summer was so busy, Miller said he was only able to get back to Pentwater seven or eight days the entire summer.

Miller has one brother, Reese, and a sister, Jill. His father, Doug, passed away when Glenn was very young. His faith is very important to him.

“At the end of the day, without Him (God), none of this is possible. He guided me and helped me through all of this,” Miller said. “I don’t believe anyone coming from Pentwater has played Division 1 baseball on a scholarship.”

Miller is back to EMU for classes and fall baseball, both starting next week.

“Your priorities have to be in line. If I want to play baseball, I have to perform well in the classroom. Colleges want to know you can handle your business in the classroom,” Miller said.

“There is a lot in the path that is unknown, take care of what you can and let the rest take care of itself,” Miller reflected.

Blue Jackets fans come out in droves for open practice