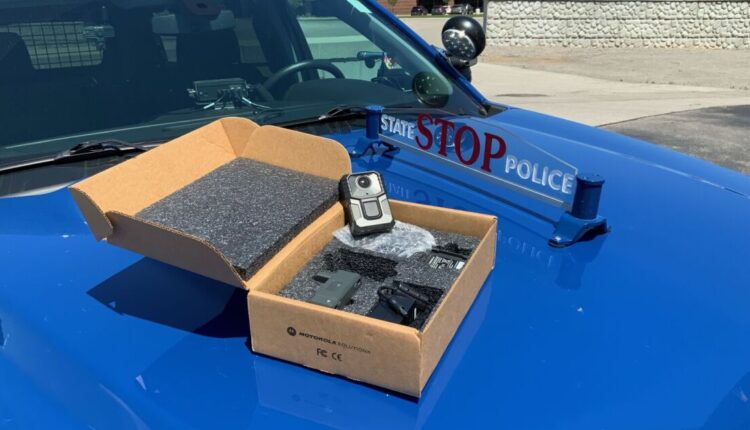 Michigan State Police officers in Northern Lower Michigan will now carry body cameras to record interactions during traffic stops and other operations, according to Lt. Derrick Carroll, to MSP spokesman at the Gaylord post.

The MSP Seventh District — which includes posts in Alpena, Gaylord, Cadillac and Houghton Lake — will outfit all 146 of its troopers with cameras.

MSP announced last week that the Alpena post has already completed training to use the cameras. The Gaylord post started his training this week. Carroll said by the end of July he expects all the training to be done.

“The public is always recording police officers. A lot of the times when stories get out it’s only told from the citizens perspective,” Carroll said. “This will give people a chance to see what the officer is seeing – which a lot of the times can be much different.”

Northern Lower Michigan is the second-to-last district to receive body cameras. The Greater Lansing area will be last, according to Carroll.

Funding for the cameras comes from the $3.8 million ongoing general fund outlined in the Fiscal Year 2023 State Budget.

“People have been saying, ‘It’s about time.’ Well, we agree,” Carroll said. “This is a line-item cost that we had to get covered.”

In September 2020, the MSP identified potential racial disparities in its division and commissioned an independent study by Michigan State University School of Criminal Justice.

The study found African Americans were significantly more likely to be involved in a traffic stop than would be expected based on their representation in the population.

Mark Fancher, a staff attorney for the Racial Justice Project of the American Civil Liberties Union (ACLU) of Michigan, said the introduction of body cameras will be good for transparency and accountability between law enforcement, and the community they serve.

“The encounters that the community frequently have with law enforcement are often very intense, very emotional, and sometimes happen very quickly,” Fancher said. “There are very often differing recollections about what happened during the encounter.”

He went on to explain that from a legal perspective, having a contemporary video of what happened can be invaluable, particularly in cases where people might have experienced a history of improper police conduct.

“Historically, great deference has been given to police accounts of what happens during these encounters,” Fancher said. “Police generally in the minds of jurors or judges or the general public are given the benefit of the doubt and assumed to have greater credibility.”

Carroll said outfitting every jurisdiction with body cameras is part of the MSP’s five-point transparency plan that came in response to the study’s findings.

The plan also includes launching statewide listening and engagement efforts in partnership with the Bridges to BLUE Citizen Advisory Council along with ramping up educational opportunities and making traffic-stop data more accessible.

Carroll said allocations from the general fund don’t cover the costs of maintenance and storage of the footage, or the costs to obtain the video via the Freedom of Information Act.

Local activist group, Northern Michigan E3, member Marshall Collins said from their point of view, they are ecstatic that MSP is following in the footsteps of the Grand Traverse County Sheriff’s Office and Traverse City Police Department in supplying body cameras for their troopers. Their biggest concern, Collins said, is officers disabling cameras during contentious moments on the job.

“We want to make sure that they’re used the right way and that they’re not turned off,” Collins said. “That’s why I think it’s important to have that training.”

According to Carroll, the cameras are constantly recording when an officer is on duty but they don’t save every piece of footage. He said they can be activated manually or sync with the officer’s patrol car to save footage before and after an interaction occurs.

Carroll said officers can face disciplinary action if they disable the camera system.

“The troopers are always recorded whether it’s by their dash camera or by the citizens. They seem to be excited that people will see their perspective,” Carroll said.

The best French fries in Metro Detroit, according to Local 4 viewers