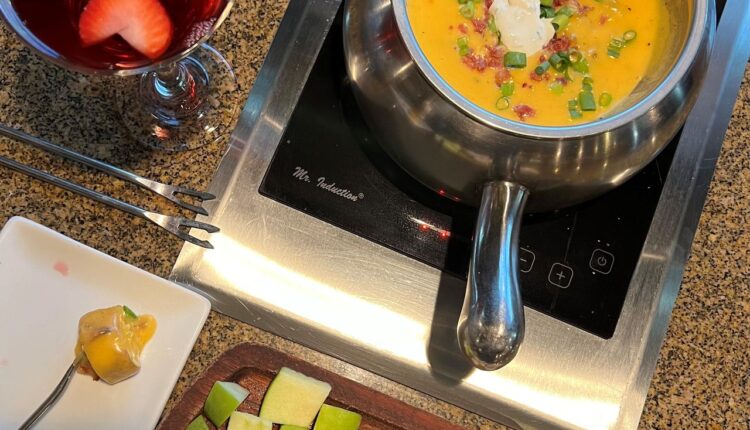 Michigan’s Best Local Eats: Dinner at The Melting Pot in Grand Rapids is ‘a celebratory affair’

The restaurant, which also has a location in Troy, serves a fondue-inspired menu, where customers dip meats, breads, veggies and more in pots of melted cheese. There’s also a chocolate fondue dessert, which can be used to dip treats such as cream puffs, macarons, cheesecake, marshmallows, waffles and more.

Customers can just order a cheese fondue, salad or entree, or they can purchase a four-course dinner for two for $85. That includes a cheese fondue, two salads, two entrees — various chicken, beef and seafood options are available ― and a chocolate fondue for dessert.

Ferguson said the four course meal is a fun, interactive dining event, which takes about 2.5 hours to finish.

“We’ve had people in there for three or four hours they’re having so much fun,” he said.

The Melting Pot, which has recently been upgraded with new lighting and interior photos, is open Monday through Thursday from 4 pm to 10 pm, and from noon to 10 pm Friday through Sunday. The restaurant’s menu can be seen online at meltingpot.com/grand-rapids-mi, and it can be reached by phone at (616) 365-0055.

Re(turn) To The River festival happening Saturday in Grand Rapids

Opinion: These are the good old days | Opinion