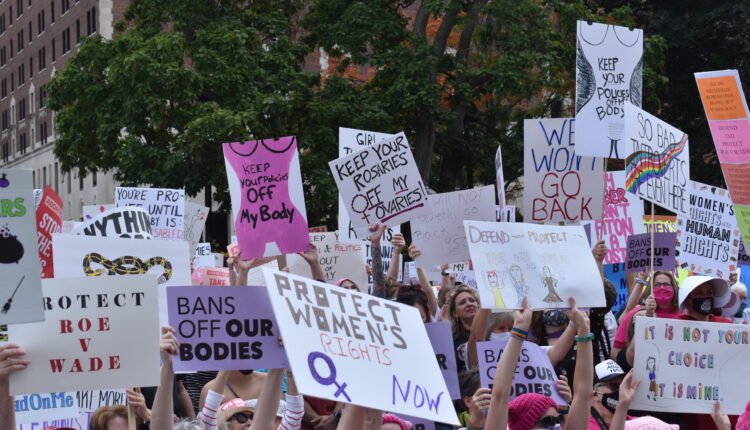 After the United States Supreme Court overturned Roe v. Wade on Friday, ending the constitutional right to an abortion that has existed in the U.S. for nearly 50 years, reproductive health care advocates are determined to ensure abortion remains legal in Michigan.

“I am heartbroken for the millions of people across the United States who are losing the sacred constitutional right to make decisions about their own bodies,” ACLU of Michigan Executive Director Loren Khogali said during a Friday press conference. “Today I am enraged on behalf of my daughters, who will have to continue to fight for rights that have long been settled in this country. And I am grateful to be here with you because we are prepared to take this fight to the people of Michigan.”

The ACLU of Michigan, Planned Parenthood of Michigan and Michigan Voices earlier this year formed a coalition, Reproductive Freedom For All, that is working to get a proposal on the 2022 ballot to enshrine the right to abortion in the state contitution. The proposal would also amend the state constitution to include people’s right to birth control, miscarriage care, and prenatal care.

Despite the Supreme Court’s decision, abortion currently remains legal in Michigan. The state has a law from 1931 that makes abortion a felony, but it is currently unenforceable after Court of Claims Judge Elizabeth Gleicher granted a preliminary injunction in a suit filed by Planned Parenthood to block the 1931 ban.

“While this is a saving grace for many who need care right now, this is not a permanent solution,” Michigan Voices Executive Director Sommer Foster said of the preliminary injunction. “The Reproductive Freedom For All constitutional amendment affirms that every person has the right to make and carry out decisions about all matters related to pregnancy, including birth control, abortion, prenatal care, and childbirth without political interference.”

In order to get the Reproductive Freedom For All’s initiative to amend the state constitution on the Nov. 8 ballot, the group must submit at least 425,059 signatures – 10% of the total votes cast in the 2018 gubernatorial election – to the Michigan Secretary of State on July 11.

“These next couple of weeks are critical for the ballot initiative as we wrap up signature collection to put this on the November ballot,” Khogali said.

Foster said the coalition is “on track to get this on the ballot” and said she expects the group will submit “over and above” the needed 425,059 signatures because they anticipate anti-abortion groups will challenge their signatures. An anti-abortion coalition – the Citizens to Support Michigan Women and Children – consisting of Right to Life Michigan and the Michigan Catholic Conference has vowed to fight the abortion access initiative if it makes it to the ballot.

“We are grateful to see the fall of Roe in the height of our efforts to stop the anything-goes abortion amendment,” Christen Pollo, the Citizens to Support MI Women and Children coalition spokeswoman, said in a statement Friday. “We have been preparing to protect Michigan’s 1931 abortion law for this very moment.”

Those who spoke during Friday’s press conference said they believe the public will back their initiative in the wake of Roe v. Wade being overturned. Should Michigan’s 1931 abortion ban go into effect, nearly 2.2 million Michiganders would lose abortion access, according to research from Planned Parenthood Federation of America.

An August 2020 poll done by North Carolina-based Public Policy Polling found that 77% of voters in Michigan agree that any decision about pregnancy should be made by the pregnant person.

“Our worst fears have become a reality today,” said Nicole Wells Stallworth, the executive director at Planned Parenthood Advocates of Michigan. “…This decision is a gross injustice, and we should all be outraged. This is about more than abortion. It’s about forcing pregnancy and parenthood in circumstances where people may be unwilling or unable and unprepared to grapple with the economic, emotional and physical ramifications that come with it.

“But we are here today to say that we are fighting back, and we are going to do everything we possibly can to block abortion bans from irreparably harming Michiganders,” Wells Stallworth continued.