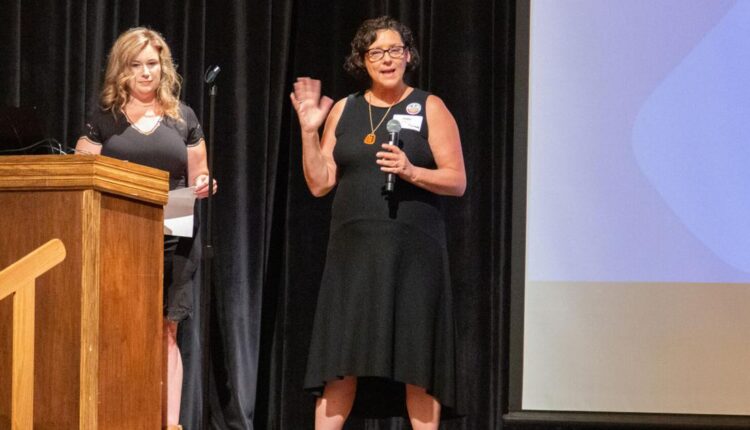 TRAVERSE CITY — A technological app that cuts down on paperwork claimed the top prize at TCNewTech’s Pitch Night at the City Opera House on Aug. 2.

MeetingMaker LLC won the $500 prize in a vote of the in-person and online audience. President and Founder Jodie Schanhals delivered the victory for MeetingMaker after taking the stage last at the event.

MeetingMaker bills is a mobile app that “reimagines accountability,” according to the Traverse City-based Schanhals.

MeetingMaker “empowers users to self-verify their attendance at meetings, appointments and community service obligations via location tracking, while preserving their privacy and anonymity,” according to its LinkedIn page. “Reports are generated and sent to case managers and other entities, allowing them to manage their entire caseload from one simple report.”

“The neat thing is, if the organization that mandates the meeting uses the app, you don’t have to check in with somebody at the meeting,” said Chris Nesbit, director of events, sales and marketing for TCNewTech.

Nesbit also said it was nice to see a regular attendee like Schanhals win the event.

“She comes to TCNewTech on a regular basis,” Nesbit said. “We’re happy she was able to win the event and that the money goes toward helping her to continue to develop her app.”

The Aug. 2 Pitch Night was open to both technological innovations as well as those pitches that didn’t involve technology. Even though a tech-based pitch won the event, Nesbit said there were several other interesting presentations.

Also at TCNewTech was a quick tip from Michael Spath from Kapnick Insurance about the necessity of commercial protection for start-ups.

The Aug. 2 event also featured an update on developments at 20Fathoms and another from Michigan’s Creative Coast about its Fresh Coast Quarterly Club meetup Aug. 18.

Normally held on the first Tuesday of the month, the September TCNewTech event is scheduled for Sept. 13 to move it back from the Labor Day holiday. Anyone interested in becoming a Pitch Night presenter can contact Nesbit at [email protected]